Weis Markets celebrated the Grand Reopening of its remodeled store in the Grandview Plaza on Baltimore Street in Hanover on Friday, February 5.

The former’s Nell’s location which reopened as a Weis Markets’ store in September has been extensively remodeled. As a result of the remodel, the 56,100 square-foot store now has a 30-seat beer café with more than 900 varieties of local crafts and imports, including Wyndridge Farms and Liquid Hero Brewery craft beers, which are brewed in York County. Customers can also create their own six packs. Beer can be purchased for takeout or on site consumption. The beer café opened in mid-January.

Since September, the store has added 1,600 new products. It has all new décor, expanded and upgraded fresh departments, a larger variety of natural and organics, a pharmacy and an expanded floral department. The store now sells fresh, store made sushi and hot pizza in the deli.

At the Grand Reopening celebration, the store made $500 donations to three local organizations: the Parkville Fire Company, Penn Township Police Department and God’s Meal Barrel, a local food pantry. Weis Markets will also announce a $1000 donation to the South Western School District Education Foundation and a $500 donation to the YWCA of Hanover. 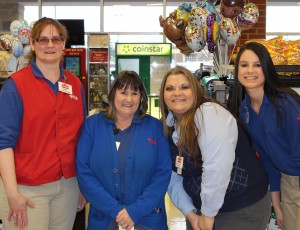 Weis Markets opens its remodeled store in the Grandview Plaza in Hanover, PA