Every aspect of the center to be transformed by holiday 2018

Critical focus areas for the project include creating a bright, contemporary and highly accessible exterior and interior that engages the center with the surrounding neighborhood, producing an effortless arrival, parking and departure experience, and offering a perfectly curated retail lineup and superior destination dining. Beverly Center and its tenants will be open during construction which is scheduled to be completed by the 2018 holiday season.

“In re-envisioning Beverly Center, we are looking to create LA’s signature urban shopping and dining experience, as well as an exciting, pedestrian-friendly anchor to one of the most creative and diverse neighborhoods in the world,” said Robert Taubman. “The center is a key asset in our portfolio, and after renovation we believe it will become one of the top ten retail centers in the nation.”

“The Beverly Center holds a special place in LA’s imagination — it’s where an entire generation of Angelenos went on first dates, bought prom dresses and met up with friends on weekends,” said Los Angeles Mayor Eric Garcetti. “Reimagining it for the 21st century is a tremendous investment in making those timeless experiences possible for the next generation of Angelenos. These plans capture the spirit of ambition and innovation that is driving our city’s economic resurgence.”

Los Angeles Councilmember Paul Koretz, Council District 5, added, “I am pleased to be working with the Taubmans to bring to our community a beautifully renovated and updated shopping experience at the iconic Beverly Center. Together, we are bringing a significant investment, good jobs, renewed economic activity and a neighborhood-sensitive project to Council District 5.”

Taubman selected Studio Fuksas to transform Beverly Center into a great urban space that meets the aspirations of Angelenos and suits the world class city it calls home. Massimiliano Fuksas had this to say about architecture: “Contrary to common belief, music should be observed in order to appreciate its true essence, while architecture should be felt.”

Upon completion, Beverly Center’s shoppers and diners will feel its new personality through significant changes that include:

Beverly Center for decades has been an iconic fashion destination regularly shopped by locals, international visitors and those who influence celebrity style and popular culture through their work in the entertainment industry. With this renovation, Beverly Center will remain well positioned to lead the city to its fashion future while connecting with these important core customers.

The center will continue to be anchored by Bloomingdale’s and Macy’s, and will have more than 100 of the world’s most coveted brands, including Apple, Burberry, COS, Dolce & Gabbana, Fendi, Foot Locker, Gucci, H&M, Henri Bendel, Jimmy Choo, Louis Vuitton, Maje, Montblanc, OMEGA, Prada, Saint Laurent, Salvatore Ferragamo, Sandro, Tiffany & Co., Traffic, Uniqlo, Versace, XXI Forever and Z Zegna. Additions to the retail lineup will be announced over the course of the project.

In addition to great retail, an estimated ten dining destinations will be developed, including two by Michelin starred,James Beard Award-winning Chef Michael Mina. His first is a multi-concept gourmet food hall called THE STREET. Located on the center’s eighth floor dining terrace, THE STREET will serve an impressive array of cuisines from hawker stations reminiscent of great bazaars from around the world. The hallmark of the experience will be offerings from both Chef Mina and approximately 15-18 concepts for an ever-changing culinary experience.

“THE STREET will feature incredibly diverse cuisine inspired by the local community and the idea of bringing people together through the universal language of great food,” said Chef Mina. “The fare will be healthy, the atmosphere casual and the overall experience will be like no other in LA.”

Part of the uniqueness of THE STREET will be its sweeping views of downtown Los Angeles and the Hollywood Hills that will provide a distinctly LA experience.

The center’s other new chef-driven and fast-casual restaurants, as well as Mina’s second concept, will be announced in the coming months.

A Reflection of its City

Along with shopping and dining, Beverly Center aims to provide a special place for individuals to gather to create, become inspired or simply connect with others. This will be done through special events and programs.

“Our goal is for Beverly Center to draw the community together through retail, dining, art, entertainment and the other passions that connect people to Los Angeles in a meaningful way,” said William Taubman. “The center will respect creativity and will mirror the interests of its shoppers.”

Further information, including an investor presentation, is available online at www.taubman.com under “Investors.” Such materials include the project’s expected stabilized return and 10-year internal rate of return.

ABOUT TAUBMAN
Taubman Centers is an S&P MidCap 400 Real Estate Investment Trust engaged in the ownership, management and/or leasing of 24 regional, super-regional and outlet shopping centers in the U.S. and Asia. Taubman’s U.S.-owned properties are the most productive in the publicly held U.S. regional mall industry. Taubman is currently developing four properties in the U.S. and Asia totaling 4.1 million square feet. Founded in 1950, Taubman is headquartered in Bloomfield Hills, Mich. Taubman Asia, founded in 2005, is headquartered in Hong Kong.www.taubman.com.

This press release may contain forward-looking statements within the meaning of Section 27A of the Securities Act of 1933, as amended, and Section 21E of the Securities Exchange Act of 1934, as amended. These statements reflect management’s current views with respect to future events and financial performance. The forward-looking statements included in this release are made as of the date hereof. Except as required by law, we assume no obligation to update these forward-looking statements, even if new information becomes available in the future. Actual results may differ materially from those expected because of various risks and uncertainties.You should review the company’s filings with the Securities and Exchange Commission, including “Risk Factors” in its most recent Annual Report on Form 10-K and subsequent quarterly reports, for a discussion of such risks and uncertainties. 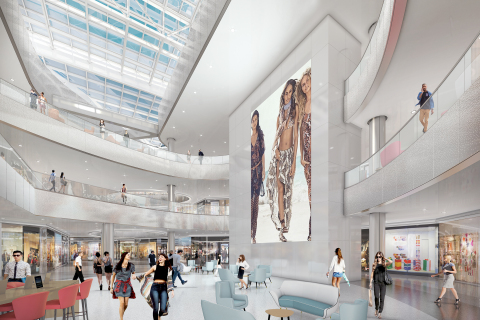