These partners, who represented countries across Starbucks China and Asia Pacific region, were the finalists in the first Regional Barista Championships in Hong Kong. More than 2,000 partners entered the competition for the chance to represent their country in the finals. The highly skilled finalists were invited to showcase their talents over two days that culminated in the final phase of the event.

Nine judges assessed the performance of the 14 competitors and awarded points based on their abilities in three categories: coffee knowledge, beverage mastery and customer service. Each partner had 20 minutes to demonstrate technical and communications skills, craftsmanship and knowledge of the barista profession.

“Our judges group, made up of eight partners and one guest who is an accredited global coffee-competition judge, was immensely impressed and inspired by the professionalism and passion demonstrated by the final competitors,” said Major Cohen, senior project manager, Starbucks Global Coffee. “It made our job as judges challenging, yet so rewarding.”

The top three partners from round one of the finals included:

Arpornsuwan joined Starbucks Thailand in 2002 as a part-time barista and is currently the store manager at the Baan Chart Khaosan Starbucks in Bangkok. She has a personal connection and understanding of coffee, having grown up near coffee farms in Thailand.

The friendly service at Starbucks is what compelled Terasaki to become a barista one year ago and today he is an assistant store manager at the Maguro store in Japan. Terasaki describes coffee as a gift to connect with customers and it gives him something new to discover every day.

Wibawa became a part-time barista with Starbucks in 2011 and just two years later was designated as a Coffee Master. Now a full-time shift supervisor at the first Starbucks Reserve store in Indonesia, Wibawa earned first-place honors in the first Indonesian Brewers Cup Championship finals in November 2015.

Based on her perfect execution, personal storytelling and knowledge of coffee sourcing, Arpornsuwan took top honors and the new title of Starbucks Barista Champion. She was awarded a first-place trophy, a hand-crafted leather roaster brewers kit complete with coffee and accessories, and a three-week coffee experience in Seattle, which will include a visit to the first Starbucks at Pike Place Market and a tour of Starbucks Reserve Roastery and Tasting Room. 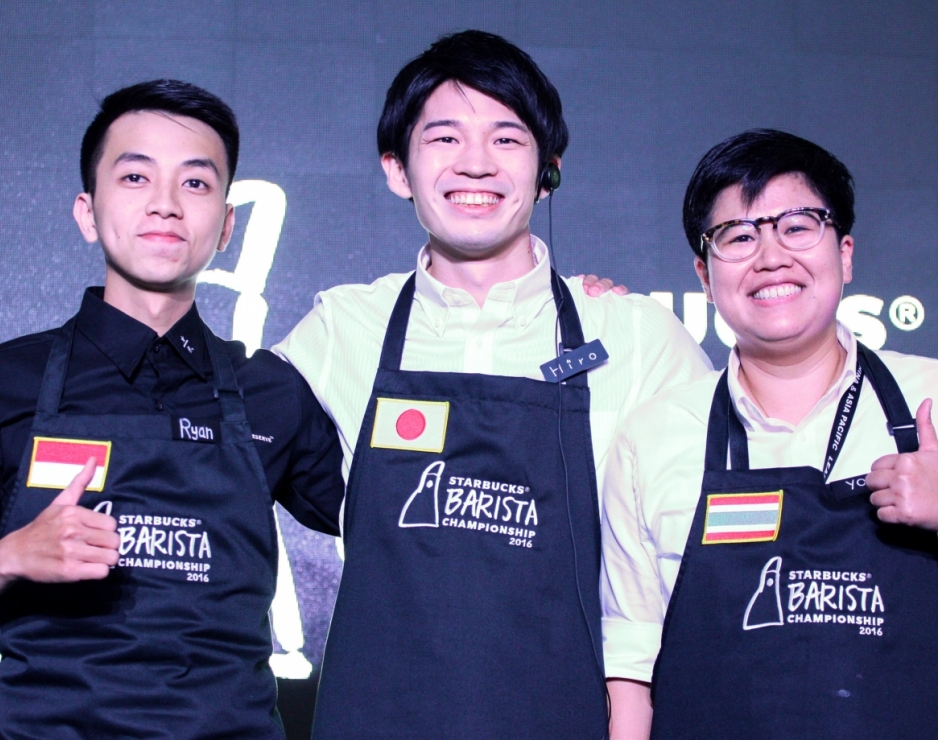