Cuellar and other industry leaders were recognized for “achieving food business success and for their history of civic service service within the New Jersey food community,” according to the New Jersey Food Council.

Cuellar, who owns and operates the ShopRite of Passaic/Clifton, was feted during a dinner at The Palace at Somerset Park, where he was joined by friends and colleagues including Wakefern Chairman and CEO Joe Colalillo.

Cuellar joined Wakefern in 2005, but his family has been in the grocery business for over 40 years. He serves on the board of the New Jersey Chamber of Commerce and lives with his wife and two children in Clifton. 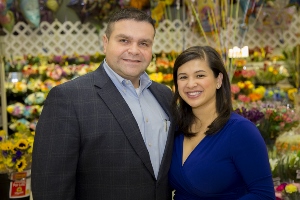 With his wife at their ShopRite of Passaic/Clifton.