CHESHUNT, England, 2016-Apr-07 — /EPR Retail News/ — A new high quality variety of English grown asparagus, which has been causing a sensation with gourmets, will soon be on sale – one week earlier than usual.

Only launched in 2012 Jubilee asparagus, which is grown exclusively for Tesco in Herefordshire, is an early season variety with a delicate sweet and nutty taste.

Last year it caused a quiet revolution in the asparagus world with demand rocketing by 150 per cent on the year before.

And, this year, due to the soaring demand, producer Cobrey Farms plan to double the amount they currently grow.

So what is it that makes Jubilee so coveted by asparagus lovers and how did it come about?

“Like any new produce variety it has taken a few years to get a name for itself but last year, thanks largely to word of mouth from food lovers, its popularity really took off.

“We’ve worked in partnership with Cobrey Farms to ensure it’s in stores a week earlier than usual and before the traditional start of the English asparagus season.”

Cobrey Farms, based near Ross-on-Wye, in south Herefordshire, is run by the Chinn family.

In 2009 Tesco’s asparagus team asked Cobrey if they could find an early season variety that tasted as good as anything produced in mid-season.

Added Tesco’s Bart Vangorp: “English asparagus is considered by foodies to be the best in the world because of the UK’s almost perfect growing conditions.

“But because the traditional English season is so short, running from around April 23 until June 21, its always incredibly popular with customers.”

Tesco worked with Cobrey Farms to develop the Jubilee variety and the first, albeit small, commercial volumes of Jubilee hit supermarket shelves in 2012 and were immediately popular.

Chris Chinn, of Cobrey Farms, said: “The feedback from shoppers was very good so we planted more. Last year demand soared so much that we are now going to be doubling the amount of Jubilee asparagus we grow.

“It takes about three years to get the full yield and this year we will have more than ever before.

“Demand for asparagus increases significantly during the English season, so we wanted to reward all those British asparagus lovers with a superior product that was available longer than standard varieties.

“The product is sold in a punnet which protects the asparagus and gives the customer an extra day’s shelf life to enjoy it compared with the traditional bundle.”

Jubilee asparagus will go on sale on Monday April 11. 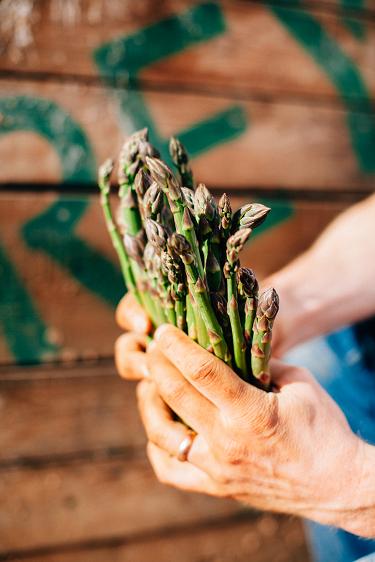