Shenzhen, China, 2016-Apr-14 — /EPR Retail News/ — Starbucks looked to its core business as a model when it convened its first summit for suppliers of manufactured goods in China.

“We studied the leadership position we were taking to get high-quality coffee,” said Kelly Goodejohn, director, Starbucks Ethical Sourcing. “We wanted to build something similar for other products that we source.”

Similar to coffee, Starbucks wanted to understand where manufactured goods were sourced, how farmers and workers were being treated and the impact the suppliers were having in local communities. The summit served as a starting point to gain more of this knowledge.

“It was an awareness opportunity,” said Goodejohn. “What we found was that many of our suppliers shared our values, wanted to do more for their employees and communities, but didn’t know how to do it.”

In 2006, when the first summit took place with just 10 suppliers in attendance, one of Starbucks goals was to cultivate a stronger rapport with them.

“Building authentic relationships with our suppliers was important as well as working with them to make improvements,” said Goodejohn. “Over time, we have worked with our suppliers in China to improve labor and environmental performance to enable higher overall performance, so they are positioned to grow with Starbucks as our business grows.”

At first, not all suppliers were willing to take Starbucks at face value.

“It was difficult to build trust, but we got there,” said Goodejohn. “While some suppliers moved on, the majority were willing to work with us and are still our suppliers today.”

Starbucks has worked with suppliers to improve worker health and safety, ensure employees get paid a fair wage, provide better living conditions at factory dormitories and confirm that products are made without emitting dangerous chemicals to protect water and air.

Three years ago, Starbucks incorporated community service into the supplier summit to highlight an important aspect of the company’s mission.

On April 13, suppliers, Starbucks partners (employees) and customers convened for a beautification and career development service project at the Shiao Community and the Young Dream Center in Shenzhen. The project is one of many that the company will engage in during its Global Month of Service that takes place throughout the month.

As a way to support suppliers on the ground year-round, Starbucks hired two field managers in China to help implement best practices related to social and environmental performance. They teach factory managers and work on continuous improvement with suppliers.

“I’m immensely proud of what we’ve done and the partners who are elevating ethical sourcing with suppliers on a regular basis,” said Goodejohn. “We have many countries that manufacture goods for us and we can bring the learnings from China to other regions. We have the right momentum and we will keep moving.” 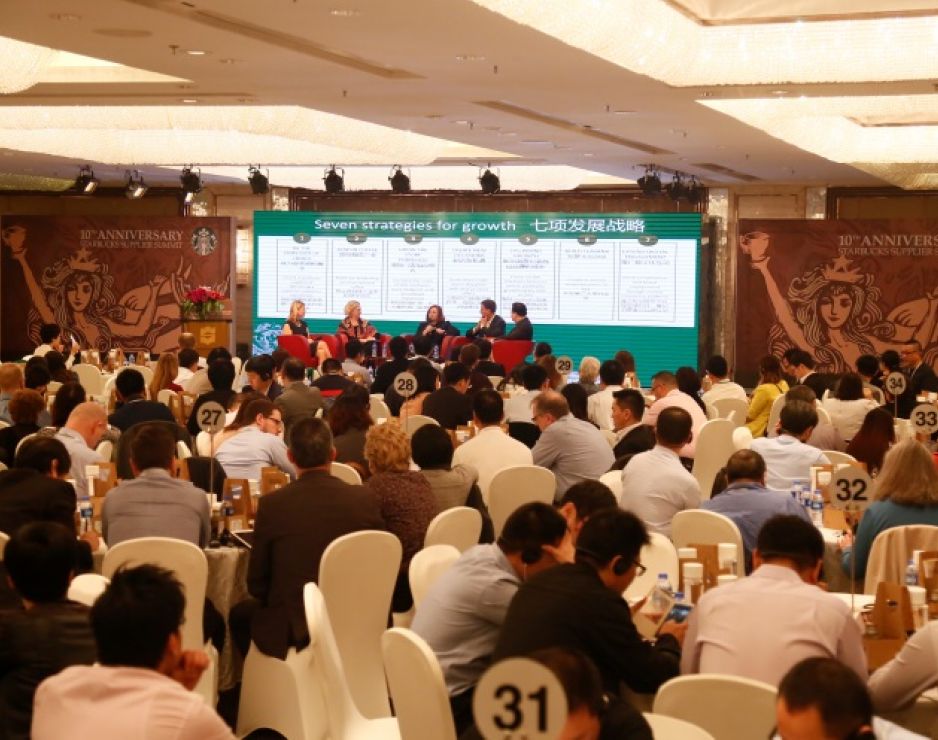