AUSTIN, Texas, 2016-May-04 — /EPR Retail News/ — Whole Foods Market is launching pupusas as the next menu concept for the company’s food truck test kitchen located at the retailer’s flagship store in Austin, Texas. The new menu officially launches on Wednesday, May 4, under the name Dina’s Pupuseria, and will offer a selection of pupusas made with corn masa, filled with a blend of cheeses and topped with meat and veggie combinations. The menu includes vegetarian and vegan options, as well as cinnamon churros, grilled corn salad and plantain chips.

The newest concept was inspired by an Austin team member, Dina Santos, on the Whole Foods Market catering team. Originally from Guatemala, Santos began making pupusas after enjoying them on visits to El Salvador and Honduras where pupusas originated. The test kitchen will feature her original pupusa recipe, Dina’s Especiales, which includes fresh squash blossoms and a side of curtido, a lightly fermented cabbage slaw.

Created by Tien Ho, the company’s global vice president of culinary and hospitality, the food truck test kitchen is a place for Whole Foods Market’s culinary and prepared foods teams to experiment with new ideas for store eateries, as well as explore collaborations with chefs and supplier partners.

The test kitchen launched in March with a concept called Tartinette, which includeda menu of open-faced sandwiches, sweet potato hushpuppies and spiralized veggies. The concept, menu and name of the truck is updated every two months to continue exploring food trends and seasonal flavors. With each new test kitchen concept, Whole Foods Market partners with a new nonprofit beneficiary. Two percent of sales from Dina’s Pupuseria will benefit Sustainable Food Center and their mission to strengthen the local food system by improving access to nutritious and affordable food.

Tien Ho has been appointed global vice president of culinary and hospitality at Whole Foods Market and will officially join the company in January 2016. 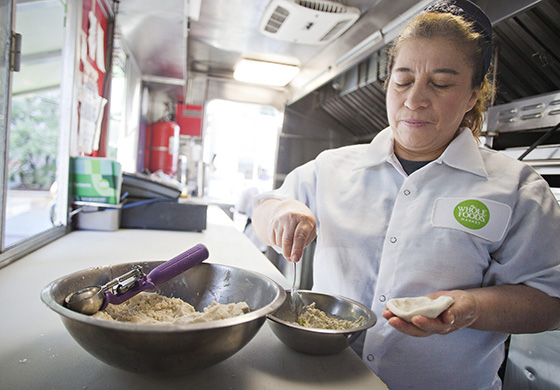