Abu Dhabi, UAE, 2016-May-12 — /EPR Retail News/ — As part of our efforts to support the charitable and community causes, LuLu Group today donated a car to the Emirates Red Crescent. This car, Nissan Pathfinder, was part of the annual raffle draw conducted by LuLu Hypermarket in the UAE and was not claimed by any winner. Setting new precedence in CSR efforts, LuLu Group has decided to donate such raffle prizes in future also to various charitable causes.

Speaking on the occasion, T.P. Abubaker said “We have always been looking at newer ways to strengthen our CSR initiatives and this is one such effort. Rather than taking back the unclaimed raffle prizes, we have decided to donate it to humanitarian organisations such as Red Crescent.”

“We are delighted by this noble gesture by LuLu Group, who have always supported our various charitable efforts. I hope this sets a new example for other institutions to come up with similar initiatives” said Al Suwaidi. 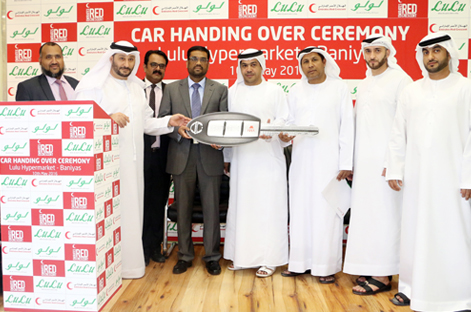