Recycling plastic bags just got easier for Cantabrians, with today’s South Island launch at New World Ilam of a recycling scheme that’s already netting more than a tonne of soft plastics every week.

The material will then be collected, sorted, baled and sent to reprocessors who’ll turn it into a feed stock that can then be used to make new products such as outdoor furniture, decking material, road bollards, and even more soft plastics recycling bins.

Foodstuffs (NZ) Ltd Managing Director Steve Anderson says the programme has already been a resounding success in Auckland and Hamilton, with a tonne of soft plastics currently being collected each week from New World and PAK’nSAVE stores alone.

“Now Cantabrians have the opportunity to play their part in keeping these soft plastics out of the landfills in their own part of the country,” says Anderson.

According to REDcycle, which operates the programme and tracks progress by each store, it seems New World and PAK’nSAVE customers are the most proactive when it comes to recycling their plastics, with 80% of the soft plastics collected from all participating outlets to date coming from a New World or PAK’nSAVE store.

“The response from our customers has been tremendous,” Anderson says. “It proves that if you give people the opportunity to do the right thing, they won’t disappoint.”

Anderson says New World and PAK’nSAVE are proud to be working with The Packaging Forum and The RED Group, and other retailers such as The Warehouse, in order to make the scheme a success.

“Retail is by its nature a very competitive business, but we mustn’t lose sight of the bigger picture. A healthy environment is the foundation of a healthy economy, and when we all pull together, as we have done on this project, we can achieve so much.”

On Tuesday, the trays won the award for the country’s top waste minimisation initiative of 2016, at the Environment Ministry’s Green Ribbon Awards.

The trays replace the non-recyclable polystyrene trays traditionally used by meat retailers, and are themselves made of 50% food grade recycled plastic.

“It’s estimated up to 80 million meat trays will be kept out of landfills every year,” Anderson says.

“That combined with the soft plastics recycling initiative all adds up to lot less waste polluting our environment, something I think we can truly be proud of.” 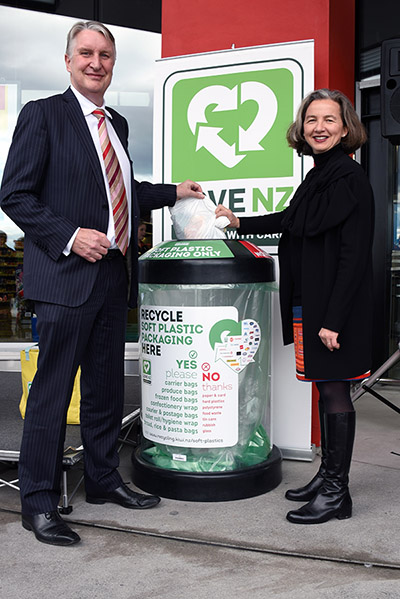