Auckland, New Zealand, 2016-Jul-22 — /EPR Retail News/ — PAK’nSAVE has concluded its superhero-themed birthday celebrations by donating $5,000 to one of the country’s most important charities, the New Zealand Breast Cancer Foundation.

Throughout last week, the home of New Zealand’s lowest prices became the headquarters of Super Stickman and his sidekicks – all in the name of raising funds for very worthwhile cause.

Anyone who dressed up as a superhero and took their photo in-store with Super Stickman went into the draw to win a $1000 grocery gift card, and earned a donation for the Foundation.

“As expected, our stores were visited by a lot of Superboys and Spidergirls, and it’s certainly brought a lot of colour and character to our aisles during these wintry school holidays,” says Bayliss.

“The most impressive entry, however, was that sent in by Sade Murray, who not only got dressed up herself but also got five kids in costume and to pose with Super Stickman.”

“As a result of this superhero effort, Sade has won the $1000 gift card from PAK’nSAVE, which she says will be used to feed the children she looks after through her home-based child care business.”

In addition, Bayliss says PAK’nSAVE will donate $5000 to the NZ Breast Cancer Foundation.

“This year’s birthday celebration was all about recognising the work the Foundation does to combat a disease that affects far too many Kiwis and their families.”

“While they may not see themselves as heroes, but in our view, just one life saved is an act of heroism, and hopefully our $5000 will go a little way towards helping the New Zealand Breast Cancer Foundation achieve just that.”

NZ Breast Cancer Foundation chief executive Evangelia Henderson says the $5000 donation will be used to support more of the work the Foundation does.

“This includes helping to fund research into breast cancer treatments, provide support services for those with the disease, and the ongoing promotion of breast cancer awareness.” 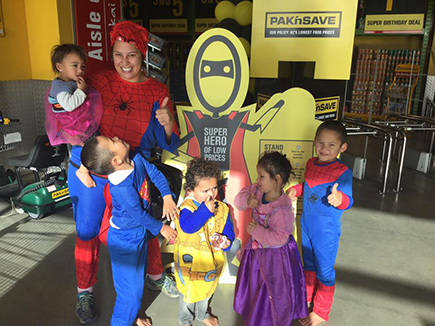