London, 2016-Jul-23 — /EPR Retail News/ — Stella McCartney unveils her Winter 2016 ad campaign images for the first time today in collaboration with iconic American artist Ed Ruscha. Shot in London, the campaign features Amber Valetta and photographed by Harley Weir. Amber Valetta effortlessly embodies the spirit of the modern Stella McCartney woman with Ed Ruscha’s striking text imagery graphically emblazoned across the frame. The statements quintessential to the designer’s vegetarian ethos and playful side, “NO LEATHERS FEATHERS OR FUR,” “VEG OUT,” “MEAT FREE” purposefully disrupts while at the same time compliments Weir’s images. Reflecting the designer’s cruelty free designs and sensibility; the new campaign will be tagged with the hashtag #StellaCares.

The collaboration with Ed Ruscha is a natural progression of Stella’s long standing personal friendship with one of the most iconic American artists of the 20th century who has pioneered the deceptively simple intersection of text and image by superimposing elliptical phrases over landscapes to create paintings. While model, actress and environmentalist, Amber Valetta returns for the first time since 2008 as the face in McCartney’s ad campaign.In addition to the print campaign, is a cheeky mood film entitled “This Film May Contain Gluten” created in collaboration with film maker Simon Aboud. The playful mock documentary of scenes behind the shoot stars Amber Valetta with cameos by Stella herself and British singer Jess Glynne. The film will be revealed on July 26th on www.stellamccartney.com, the brand’s social media platforms.

The new campaign is a celebration of Stella signature designs inspired by sensuality with a sense of humour. Amber showcases this season’s luxurious and effortless looks featuring urban puffa jackets, swan print motifs; fluid knits with ruffle detailing and the designer’s new bag Nina. Also included in the new campaign is a tactical version highlighting the iconic Falabella bag and popular Elyse shoe.

The campaign will break in the September issues of titles including Vogue, Harper’s Bazaar, W, Elle, V and Interview in the US as well as other international titles in the UK, France, Italy, Spain, Scandinavia, Russia, Japan, China.

About Stella McCartney
Stella McCartney is a 50/50 joint venture partnership between Ms. Stella McCartney and Kering established in 2001. A lifelong vegetarian, Stella McCartney does not use any leather or fur in her designs. The brand’s ready-to-wear, accessories, lingerie, fragrance, kids and adidas by Stella McCartney collections are available through 47 other free-standing stores including London, New York, Los Angeles, Tokyo, Hong Kong, Paris and Milan as well around 600 wholesale accounts in key cities worldwide. For more information about Stella McCartney, please visit www.stellamccartney.com. 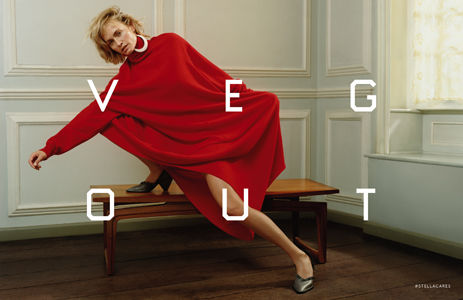