Tokyo, 2016-Jul-25 — /EPR Retail News/ — Rakuten, Inc. today announced a revision to the definition of “spouse” under its internal employment regulations to include recognition for same-sex partners. The revision was approved at a Board of Directors meeting held on July 22, 2016.

Rakuten, which will celebrate 20 years since its founding next year, has grown into a major international innovative internet company that now boasts a workforce of over 13,000 employees worldwide offering more than 70 services.

Driven by its Englishnization initiative to implement English as the official company language due to global expansion of its businesses, the number of non-Japanese employees has increased significantly.

“Rakuten brings together people from many different backgrounds and we are very proud to support and provide a diverse and inclusive workplace with services and benefits that recognize same-sex partners,” commented Akio Sugihara, Chief People Officer and Managing Executive Officer, Rakuten.

To meet the diverse needs of its employees, Rakuten has worked to introduce systems that respect the individual, including the establishment of a Diversity and Inclusion Group. As part of these efforts, a review was prompted by a request from its LGBT (*1) employees, global trends, and its status as a major international company.

As a result of this review, Rakuten will broaden its interpretation of “marriage” and “spouse” in the internal rules of employment policies, which thus far only recognized a marriage certificate under Japanese law, to now also include same-sex partners. (*2)

The benefits extended to same-sex partners will include congratulation leave when partners officiate their relationship or condolence leave in the event of a partner’s death as well as consolation payments.

In addition, accompanying this revision, initiatives aimed at Rakuten LGBT customers are being implemented at Rakuten Wedding, Viber, Rakuten Card, Rakuten Life Insurance, and Rakuten Edy for same-sex family members (For details, please see the “Initiatives of Each Service” section below). The company will continue to reflect on the further implementation of initiatives with other group services.

Incidentally, ahead of this decision, in June this year an LGBT network was launched by company volunteers, and LGBT employees and allies (*3) have been collaborating on activities to deepen understanding of LGBT issues within Rakuten.

Going forward, Rakuten will continue to work to foster a workplace environment that allows all employees to utilize their unique qualities and display their individual talents to the fullest extent.

LGBT Initiatives of Each Rakuten Service:

Viber
Messaging app “Viber” has released a set of original character stickers in the colors of the rainbow, a globally recognized symbol of support for the rights of the LGBT community.

Rakuten Card
Rakuten Card extended the scope of targets to include same-sex partners in requirements for a joint use of “Family Card,” which is issued to Rakuten Card members (including Rakuten Premium Card, Rakuten ANA Mileage Club Card, and Rakuten Pink Card) and their families in the same household. Families were originally limited to spouse, parents, and children over 18 years old (except high school student).
URL: http://www.rakuten-card.co.jp/

*Submission of certain documents is required.

Rakuten Edy will announce the release of an rainbow designed “Edy-Rakuten Point Card.” A limited number of these specially designed cards will be sold at the Rakuten Edy official Shop on Rakuten Ichiba.
URL: http://www.rakuten.co.jp/edyshop/ 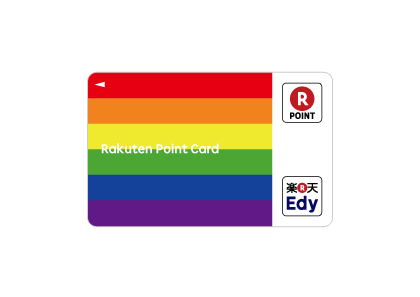