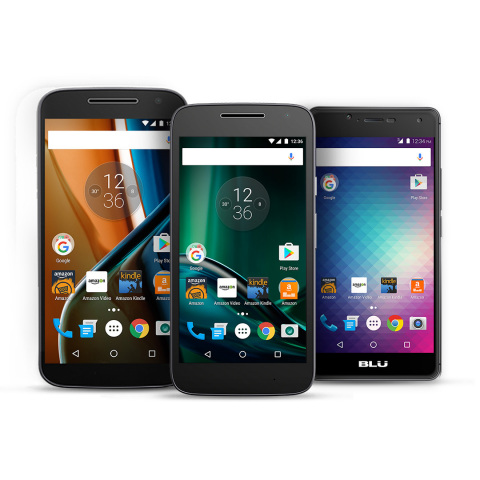 SEATTLE, 2016-Sep-07 — /EPR Retail News/ — Since Amazon launched exclusive pricing for Prime members on new unlocked Android smartphones two months ago, the BLU R1 HD and Moto G have been the top two best-sellers in unlocked phones on Amazon. Starting today (Sep. 6, 2016), Prime members have another Prime exclusive option to choose from with the newly launched Moto G Play—at just $99.99, it’s $50 off the full retail price, and features a 5” HD display, a quad-core processor with 2 GB of RAM, 4G LTE speed, and compatibility with all major CDMA and GSM carriers, including AT&T, Sprint, T-Mobile, and Verizon. The Moto G Play is available for pre-order starting today at www.amazon.com/prime-exclusive-phones and ships on September 15th.

The breakthrough pricing on Prime exclusive unlocked smartphones is supported by personalized offers and ads, including deals and product recommendations, displayed on the phone’s lockscreen. When a customer sees an offer, they can tap to learn more about it or simply swipe it away to dismiss.

“Unlocked phones are the fastest growing category within cell phones on Amazon—and now our Prime exclusive phones are our best-selling unlocked phones,” said Laura Orvidas, Vice President, Consumer Electronics, Amazon.com. “The BLU R1 HD and 4th Generation Moto G are also among our highest rated phones at 4.2 stars—we’ve been thrilled by the response from customers. Now we’re excited to bring another fully featured Android smartphone to the Prime exclusive lineup at an incredible price—the Moto G Play is available for only $99.99.”

Here’s what customers and media are saying about Prime exclusive phones:

The new Prime exclusive Moto G Play features Android 6.0 Marshmallow with Google Mobile Services, including Google Maps, Gmail, YouTube, and Google Play. It boasts a 5” 720p HD display, Qualcomm Snapdragon 410 quad-core processor with up to 1.2 GHz, 2 GB RAM, and 4G LTE speeds. Customers can snap crystal-clear photos with an 8MP rear-facing camera that also features a fast f/2.2 aperture and a camera sensor that uses larger-than-average pixels, as well as a 5MP front-facing camera. Moto G Play also captures video at 30 fps in 1080p. It is available with 16 GB of internal storage, plus microSD card support for up to 128 GB of additional storage.

A single sign-on experience provides Prime members easy access to their Prime benefits through the most popular Amazon apps, including tens of thousands of movies and TV episodes with Prime Video, over one million songs and playlists with Prime Music, unlimited photo storage and backup with Prime Photos, one free pre-released book a month with Kindle First, FREE two-day shipping on millions of items, and more. Customers also get access to thousands of apps, games and in-app items that are 100% free with Amazon Underground, and can shop a personalized selection of Amazon’s daily deals right from a new home screen widget.

Customers can pre-order the Moto G Play starting today, and devices will begin shipping on September 15th. Visit www.amazon.com/prime-exclusive-phones for additional information and details about the Prime exclusive offer. The Moto G Play without offers and ads is also available on Amazon to Prime and non-Prime members, at full retail price.

More to Prime
Tens of millions of Prime members around the world enjoy the many benefits of Prime. In the U.S., that includes unlimited Free Two-Day Shipping on more than 30 million items across all categories, unlimited Free Same-Day Delivery on more than a million items in 27 metro areas and one and two-hour delivery with Prime Now on tens of thousands of items available in more than 25 metro areas. In addition to fast, free shipping, members have access to unlimited streaming of tens of thousands of movies and TV episodes with Prime Video, more than one million songs and thousands of curated playlists and stations with Prime Music, early access to select Lightning Deals all year long, free secure unlimited photo storage with Prime Photos and one free pre-released book a month with Kindle First.