A Dark Chocolate and Caramelized Banana Oatmeal is available beginning today (September 6). This breakfast option starts with traditional oatmeal that is topped with a slow-kettle cooked banana compote and a mixture of single-origin Columbian dark chocolate, roasted almonds and salted toffee.

“Browning the natural sugars in bananas brings out a whole new dimension of richness and complexity,” said Taylor Fernandes, Starbucks product development manager. “When mixed with our oatmeal and the crunchy toppings, the combination of flavors is reminiscent of freshly-baked chocolate chip banana bread.”

The compote is made from bananas that are caramelized to a brûlée and heated in a kettle to bring out the flavors. It comes pre-packaged for those on-the-go and to allow customers the flexibility to add as much as desired to their oatmeal.

“The use of compote with oatmeal and porridge is a popular trend in Europe,” Fernandes said. “We wanted to try something similar for our customers.”

For the crunchy oatmeal topping, Starbucks used the same single-origin Columbian dark chocolate found in several of its baked goods and along with the roasted almonds to provide a contrast to the sweetness of the caramelized banana compote. The addition of the toffee pieces enhances the banana’s caramel flavor.

“The idea of chocolate and toffee may seem a bit unconventional for breakfast at first glance, but when you think of it as being a play on banana bread, it’s a very natural fit,” said Fernandes.

Dark Chocolate and Caramelized Banana joins existing oatmeal flavors including Classic and Hearty Blueberry. In addition to the new oatmeal, customers will find a selection of baked goods being offered for the first time at Starbucks.

Caramelized Apple Pound Cake
A cream cheese cake that is swirled with apple spice cake and ribbons of cinnamon and caramelized apples, then topped with a sweet frosting.

Pumpkin Cheesecake Bar
A blondie base with a cheesecake top is swirled with spiced pumpkin. It’s available individually and in tray that includes five bars.

Pumpkin Cream Cheese Muffin
A returning favorite (along with the Pumpkin Scone and Pumpkin Iced Sugar Cookie) this moist, perfectly-spiced pumpkin muffin is filled with sweet cream cheese and a sprinkling of chopped, caramelized pepitas for a delightful balance of salty and sweet.

Pumpkin Iced Sugar Cookie
A buttery shortbread cookie in the shape of a pumpkin to celebrate the season.

Bantam Bagels
Starbucks introduced Bantam Bagels in 30 of its New York stores in June of 2015, and since then the mini stuffed bagels have grown in popularity. Bantam Bagels are now available in more than 7,500 Starbucks locations across the U.S. in three flavors: Classic, French Toast and Everything Bagel. 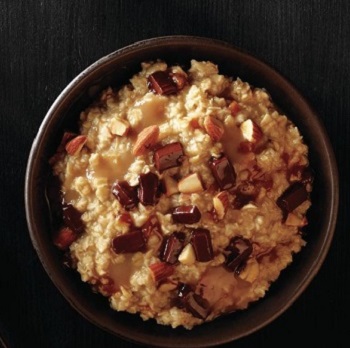