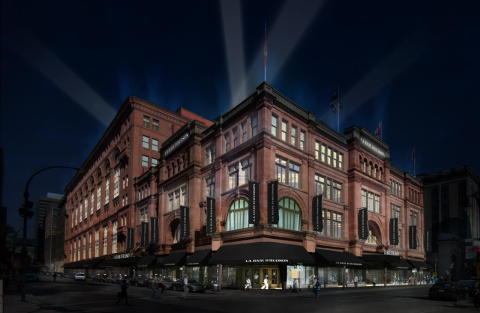 “We are excited to bring the distinctive Saks Fifth Avenue experience to Montreal, which has long been a destination for fashion in Canada,” commented Marc Metrick, President, Saks Fifth Avenue. “Shoppers here are known for their impeccable style and we’re confident that Saks’ superior designer merchandise and exemplary customer service will be as well-received here as it has been across Canada.”

Hudson’s Bay will undergo an extensive renovation that will reconfigure the store layout, redefine departments and enhance the overall shopping environment. The multi-million dollar investment in Canada’s iconic store will touch all levels of the building, and further positions Hudson’s Bay as the most exciting department store in Canada. The new concept for Hudson’s Bay will introduce the most modern department store shopping experience while maintaining the company’s heritage. The plans build on the success of the company’s Queen Street flagship, where Hudson’s Bay and Saks Fifth Avenue are co-located and offer an unparalleled shopping experience.

“The reimagining of our iconic Montreal location is a significant milestone in the evolution of our Hudson’s Bay store, given the importance of the Quebec customer to our business,” stated Liz Rodbell, President, Hudson’s Bay and Lord & Taylor. “In today’s digital world, our store experience is paramount in our mission to entertain and delight our customers. This renovation will keep Hudson’s Bay central to our customers’ shopping experience for years to come.”

Saks Fifth Avenue currently has two full-line stores in Canada at CF Toronto Eaton Centre and CF Sherway Gardens, and has announced plans for a store in Calgary, Alberta.

Hudson’s Bay will remain open throughout the renovation process.

ABOUT SAKS FIFTH AVENUE
Saks Fifth Avenue, one of the world’s pre-eminent specialty retailers, is renowned for its superlative American and international designer collections, its expertly edited assortment of handbags, shoes, jewelry, cosmetics and gifts, and the first-rate fashion expertise and exemplary client service of its Associates. As part of the Hudson’s Bay Company brand portfolio, Saks operates 40 full-line stores in 22 states and Canada, five international licensed stores and saks.com, the company’s online store.

ABOUT HUDSON’S BAY
Hudson’s Bay Company, incorporated in 1670, is North America’s oldest company. Hudson’s Bay has grown to become Canada’s most prominent department store, today operating 90 full-line locations and thebay.com. It has established a reputation for quality, service, and style by offering well-edited assortments of exclusive and popular fashion, beauty, home and accessory designers and brands. It is part of the Hudson’s Bay Company brand portfolio.

ABOUT HUDSON’S BAY COMPANY
Hudson’s Bay Company is one of the fastest-growing department store retailers in the world, based on its successful formula of driving the performance of high quality stores and their all-channel offerings, unlocking the value of real estate holdings and growing through acquisitions. Founded in 1670, HBC is the oldest company in North America. HBC’s portfolio today includes ten banners, in formats ranging from luxury to better department stores to off price fashion shopping destinations, with more than 470 stores and 66,000 employees around the world.