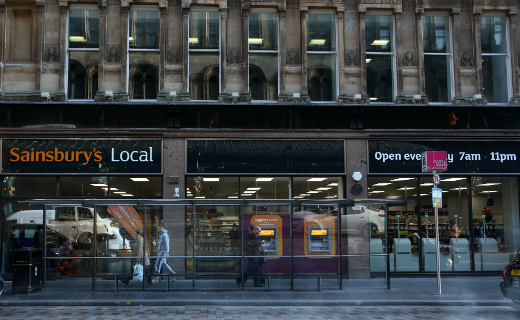 London, 2017-May-12 — /EPR Retail News/ — Sainsbury’s has opened its 100th store in Scotland, creating 64 new local jobs. The 6,800 sq. ft store on Gordon Street in Glasgow was opened today by Keith Brown MSP (Cabinet Secretary for Economy, Jobs and Fair Work) and Mike Coupe (Chief Executive, Sainsbury’s) and represents over 30 years of continuous investment and growth in the country.

The retailer has been serving Scottish customers since 1984 when it opened its first supermarket at Cameron Toll in Edinburgh.

Sainsbury’s now has over 1.5 million customers a week shopping at 35 supermarkets and 65 convenience stores in Scotland and employs over 9,000 people. Over £650 million of Scottish produce is sold across the retailer’s UK stores every year through 86 local suppliers.

It employs a further 1,000 people at its Sainsbury’s Bank headquarters in Edinburgh and also recently acquired Argos and Habitat, accelerating its strategy to be a multi-channel food, general merchandise, clothing and financial services retailer.

It will be opening new Argos shops at Hawick, Blackhall (Edinburgh), Hamilton and Dundee in the next few months and 10 standalone Argos stores will be transformed to the new digital format, helping customers benefit from a better and faster in-store experience.

Sainsbury’s is also investing in its existing supermarkets to provide a greater choice of food, clothing and homeware products and will look to open six new convenience stores in Scotland over the next 18 months.

Mike Coupe, Chief Executive at Sainsbury’s said: “We’re delighted to reach this milestone. Our business in Scotland is diverse and growing and we are continuing to innovate so we can offer our customers greater convenience, flexibility, speed and choice to shop with us whenever and wherever they want. We’re looking forward to building on the success of the last three decades.”

Cabinet Secretary for Economy, Jobs and Fair Work Keith Brown said: “Congratulations to Sainsbury’s for opening its 100th store in Scotland. The Scottish Government recognises that a vibrant and successful retail industry is crucial for our economy to thrive. We will continue to work with Sainsbury’s and all of the retail sector to create the right environment to encourage investment, create jobs and inspire innovation in products and services.”