Los Angeles, 2015-4-14 — /EPR Retail News/ — Tech talent clustering is a growing driver of demand for office space in both large and small markets across the U.S., according to a new CBRE Research report, “Scoring Tech Talent,” which ranks 50 U.S. markets according to their ability to attract and grow tech talent.

“Tech talent growth rates are the best indicator of labor pool momentum and it’s easily quantifiable to identify the markets where demand for tech workers has surged,” said Colin Yasukochi​, director of research and analysis for CBRE. “Tech talent growth, primarily within the high-tech industry, has recently been the top driver of office leasing activity in the U.S.”

Though tech talent  comprises only 3.4 percent of the total U.S. workforce (4.4 million workers), the high-tech industry accounted for more major U.S. office leasing activity  than any sector in both 2013 (13.6 percent) and 2014 (19.0 percent), according to the CBRE report.

“For the past two years, the high-tech industry has not only spurred the economy as a whole, but it has been the top driver of commercial office activity, influencing rents and vacancy in major markets across the U.S.,” said John Frager, executive managing director of CBRE’s Tech and Media Practice. “The report showed Manhattan with the highest office rent and San Francisco with the lowest vacancy rate of the 50 tech talent markets.”

The top 10 large markets on the Tech Talent Scorecard (identified as markets with a talent pool above 50,000 tech professionals) were:

Dallas, Orange County, Chicago and Raleigh-Durham took the 11, 12, 13 and 14 spots on the list before a small market—defined as a market with a tech talent labor pool of less than 50,000—made its way onto the list.  The top-ranked small markets included:

The report also looked at which markets present the greatest cost for occupiers based on wages paid to employees and rent paid for office space. CBRE Research combined these two costs for a “typical” 500-person tech firm needing 75,000 sq. ft. of office space for each market and found that, for large markets, Silicon Valley is the highest cost and Detroit is the lowest cost. For smaller markets, Oakland is the highest cost and Oklahoma City is the lowest cost.

“Though highly concentrated within the high-tech services industry, tech talent is not limited to any one type of company and can be found across all industry sectors. In fact, more than 60 percent of tech talent jobs are located outside of the core high-tech industry and these workers help generate innovation and advances that can boost the whole economy, including the commercial real estate market,” said Yasukochi.

CBRE report shows impact will vary by property type, with the retail sector most insulated and the office market most exposed

​Los Angeles, 2015-3-12 — /EPR Retail News/ — Lower oil prices will have effects across the Houston commercial real estate market, but fears of broad-based decline are overblown, according to a new report from CBRE Research. The report finds that the degree of impact will vary based on the magnitude of change in employment, and by property type, with expected impact to the retail sector being negligible and the office sector, modestly negative.

“The outlook for Houston commercial real estate is less positive than a year ago, and certain submarkets and property sectors can expect to see at least temporary shortfalls in demand,” said Spencer Levy, Americas Head of Research, CBRE. “However, we expect oil prices to slowly drift up over the next two or three years. That, plus strong growth in the U.S. economy will limit the impact of the recent drop in prices on the market.”

Much has been written in the popular, economic and real estate press about the challenges the Houston economy may face due to low oil prices. However, in commercial real estate the story is more nuanced, with a number of considerations, including:

“Ultimately, the fall in oil prices results in winners as well as losers. The winners are broadly spread, the losers are usually in specific locations” added Mr. Levy. “Investors are acknowledging the changing global industry dynamics, including the U.S. push for energy independence, the decline in OPEC’s power and growing political support for the international trade of domestic liquefied natural gas (LNG) and crude oil – all of which could potentially have positive implications for Houston and the U.S. energy sector.”

CBRE Research’s global perspective is that most of the oil-producing economies face a tough 18 months or so. “Russia, for instance, is expected to see its GDP decline in 2015 by 5 to 8 percent. However, led by the U.S., overall growth in the world economy is expected to pick up in 2015 and 2016. This will provide some support for oil prices, which we expect to drift up slowly from this point onwards as some production capacity comes out of the market,” said Richard Barkham, Global Chief Economist, CBRE.

“It was always clear that the beneficial effect, on consumer spending for instance, would only show through in the medium term. The pain would be near term and localized in energy-centric markets, such as Houston and Calgary. Houston can at least look forward to some offset for falling energy-related investment from revived domestic demand growth across the whole of the U.S. The same cannot be said for Russia, Venezuela and Nigeria,” added Mr. Barkham.

Note to editors/journalists: To speak with a CBRE expert or obtain a copy of the report, please email robert.mcgrath@cbre.com or corey.mirman@cbre.com.

​Los Angeles, 2015-2-6 — /EPR Retail News/ — Canada is the unrivaled global investor in U.S. real estate with nearly $10 billion of direct investments in 2014—ahead of Norway, China, Japan and Germany—according to the latest research from CBRE. 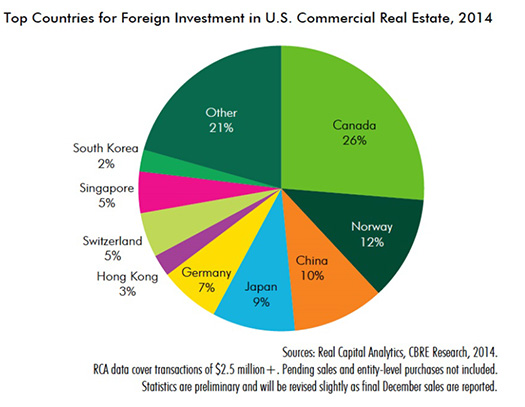 “While we have seen rapidly rising Chinese global investment and oil-rich countries in the Middle East or Norway increasing their allocations to global real estate, Canadian buyers continue to dominate foreign investment in the U.S. and should remain on the radar screens of American investors and owners of U.S. real estate,” said Chris Ludeman, Global President, CBRE Capital Markets.

“Canadians, other global investors and Americans share the same challenge—finding attractive opportunities with reasonable pricing that can produce a favorable risk-adjusted return. That said, we expect the investment climate to remain brisk and U.S. volumes will continue rising in 2015.”

The U.S. is by far the largest destination for Canadian global capital. Of the $22 billion that Canada invested outside of its borders in 2014, 44% went to the U.S. The next highest shares—17% and 14%—went to Australia and the U.K., respectively. It should be noted that the U.S. market share of Canadian global investment dropped below its 2007-14 average of 48% in 2014.

“Canadian investors find U.S. real estate attractive for many of the same reasons that other countries do. The U.S. offers opportunities for value creation, healthy cash flows and favorable risk-adjusted returns,” said Ross Moore, CBRE’s Director of Research for Canada. “The level of Canadian investment is highly correlated with the health of the American economy and exchange rates, but the overriding motivation is that Canadian institutional investors need to look beyond their borders to find product and achieve greater diversification.”

For all property types combined, as with total global capital flows into the U.S., New York is the leading destination for Canadian real estate capital, followed by Boston and Broward County in Florida, which made the list due to a significant hotel acquisition. Seattle is somewhat unusual for global capital, but not unusual for Canadian capital given its proximity to Canada and, in particular, Vancouver. 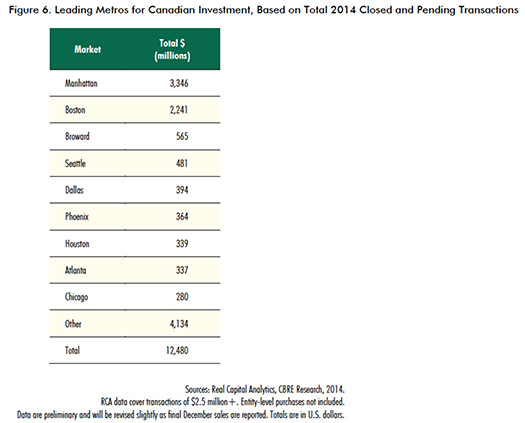 * Preliminary figure and may be revised upward as final 2014 closings are recorded. These statistics come from Real Capital Analytics’ transactional database, which includes commercial real estate transactions exceeding $2.5 million. The figures include neither entity-level acquisitions nor pending or under-contract transactions.​

“Even with the somewhat gloomy economic headlines, consumer demand is reasonably firm in most markets,” said Richard Barkham, Global Chief Economist, CBRE. “We can expect to see a continuation of the post-crisis pattern of periods of optimism followed by periods of pessimism. The Americas will see stronger growth than the Eurozone, as the latter has been constrained by restructuring in the banking sector as well as overly tight fiscal and monetary policy. Asia Pacific will record slightly lower growth in 2014 over 2013, but is still expected to outpace the other two regions by a considerable margin.”

The “Occupy Central” protest, which began late in the third quarter, has not yet materially impacted retail rents in Hong Kong,” said Henry Chin, Head of Research, Asia Pacific, CBRE. “We did see lower shopper footfall in affected areas in October; however, the Christmas shopping season will provide some support to retail sales in the final quarter.”

Retailer demand for prime locations in major cities across EMEA remained firm, but rental growth has tailed off, leaving most markets flat in Q3 2014. Hamburg (up 6.5 percent quarter-over-quarter) and Munich (up 5.6 percent quarter-over-quarter) were among the few markets to record growth, reflecting the fact that, despite the recent economic headlines, domestic consumption in Germany remains firm.