GRAND RAPIDS, Mich., 2014-10-20— /EPR Retail News/ — The Meijer Simply Give campaign held this fall generated more than $2.6 million for food pantries throughout the Midwest – an amount that nearly doubled the generous donations received from its previous record-breaking season earlier this year.

Meijer customers donated more than $726,000 during the fall Simply Give campaign that began in early August during the inaugural Meijer LPGA Classic presented by Kraft. That commitment to supporting hungry families, combined with a donation from Meijer, raised the fall campaign total to more than $2.6 million, making it the most successful campaign since Simply Give began in November 2008.

“We cannot thank our customers, team members and food pantry partners enough for continuing to rise to the challenge and help us feed hungry families in the communities we serve,” Co-Chairman Hank Meijer said. “It’s inspiring to see this level of engagement.”

The Grand Rapids, Mich.-based retailer began its Simply Give program as a way to help local food pantries throughout the Midwest achieve their mission of feeding hungry families.

Thanks to the fall campaign that ended in late September, Simply Give has generated nearly $12 million for those partners to restock their shelves and feed hungry families. That total includes an estimated $600,000 donation from theMeijer LPGA Classic to the Simply Give program.

“We know how important it is to our customers that their generous donations remain local,” Emerson said. “That’s why each of our stores partner with a food pantry in their community during the Simply Give campaigns.”

During each Simply Give program, which runs three times a year, customers are encouraged to purchase a $10 Simply Give donation card upon checkout. Once purchased, the donation is converted into a Meijer Food-Only Gift Card and donated directly to the local food pantry selected by the store.

“Hunger is a problem that continues to increase in all of our communities,” Hank Meijer said. “The Simply Give program gives everyone a chance to work toward ensuring no one has to live without food.”

To view a video that further explains the Simply Give program, and other Meijer hunger relief efforts, please visit http://newsroom.meijer.com/meijer-simply-give.

About Meijer Philanthropy
Meijer is a family-owned retailer based in Grand Rapids, Mich. with a fundamental philosophy aimed at strengthening the communities it serves. Meijer proudly donates more than 6 percent of its net profit each year to charities throughout the Midwest. With hunger as a corporate philanthropic focus, Meijer partners with hundreds of food banks and pantries through its Simply Give and food rescue programs. Meijer also supports education, disaster relief, and health and wellness initiatives. For additional information on Meijer philanthropy, please visit www.meijercommunity.com. Follow Meijer on Twitter @twitter.com/Meijer and @twitter.com/MeijerPR or become a fan at www.facebook.com/meijer. 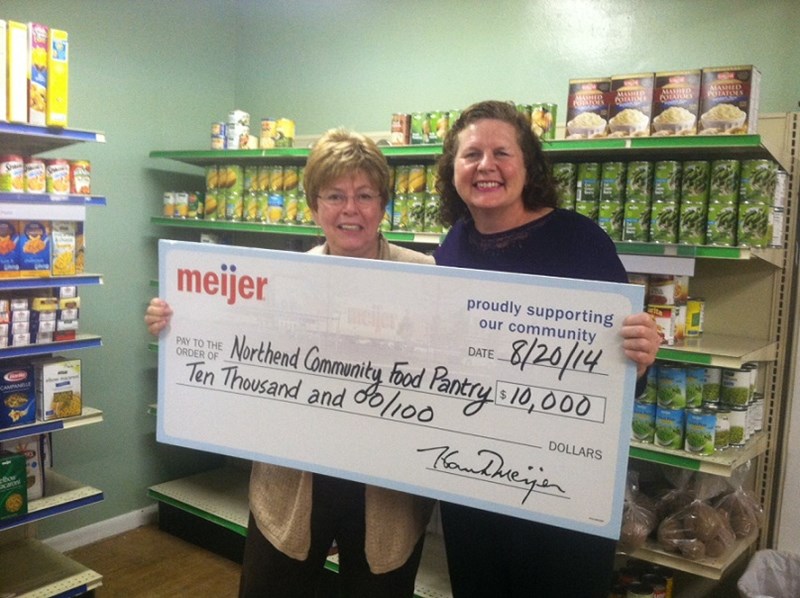 The Meijer Simply Give fall campaign generated more than $2.6 million for food pantries throughout the Midwest