This winter clothing is part of a $50,000 donation from the Co-op Refinery Complex to Geroy’s Coats 4 Kids campaign through the Huddle Up Foundation. The donation will equip thousands of children with winter jackets and create long-term sustainability for the foundation.

“We recognize the importance of giving back to a community and a province that has been so supportive of us,” said Gil Le Dressay, Vice-President of Refinery Operations. “We are so proud to be partnering with Geroy and the Huddle Up Foundation so that together we can make a practical difference to many children in need.”

Now in its second year, Geroy’s Coats 4 Kids campaign has distributed thousands of new and gently-used coats for kids aged four to 18 in Regina and across Saskatchewan. When he was playing with the Saskatchewan Roughriders, Simon was inspired to launch the campaign as a result of his dedication to community and youth.

“No kid should be without a coat in winters like we have here,” said Simon. “We all can make a difference by providing a basic necessity that contributes so much to the health and well-being of our kids.”

As ambassadors for the Huddle Up Foundation, Ryan and Simon also spoke to the students about what it takes to be a champion, sharing stories of success and defeat.
### 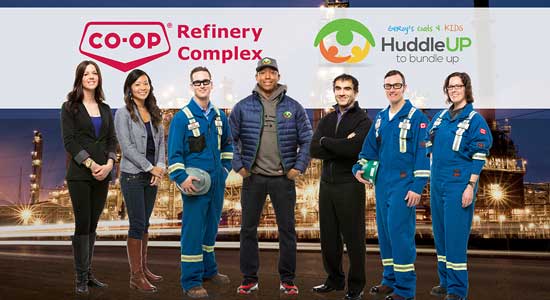