SEATTLE, 2015-2-23 — /EPR Retail News/ — The aroma from the first cup of coffee every morning takes Troy Alstead back to key moments in his life.

Growing up with his brothers in Puyallup, Washington where his parents always had coffee brewing in a percolator. Attending the University of Washington, where he’d walk to one of the first Starbucks stores to discover coffees of the world. Reading the Sunday newspaper over coffee in his kitchen, shortly after he got married, where he saw a job listing for a Starbucks financial analyst.

“I wasn’t looking to change jobs at the time, but the Starbucks logo caught my eye because I was a loyal customer,” Alstead recalled. “To me Starbucks was this incredible place I went for coffee. I didn’t imagine working there.”

He joined Starbucks early in 1992 when the company had about 100 stores and was privately owned. Alstead was on teams that guided Starbucks initial public offering and outlined the company’s expansion into global markets. He served as both the chief financial officer and the chief operating officer. Soon, he’ll begin a sabbatical from Starbucks which he said is “important for me and my family right now, but still not easy.”

Alstead reflects on 23 years with the company, discusses how he’ll spend his free time, and offers a few words of advice to Starbucks partners (employees) who are just beginning their careers.

“I’ve been wanting to invest more time in my family – with four kids at home and one of them ready to go off to college – and every time my wife and I talked about it, I’d think ‘not yet, not yet, not yet,’” he said. “The reason I know I can step away now is because the company is in extraordinary shape. Starbucks depth of leadership and financial performance are exceptional, and the strategy has never been clearer. All of this makes it possible for me to leave for a while. Not easy, but possible.”

Most of the projects Alstead worked on in his early Starbucks career could also be described as “not easy, but possible.”

Four years into his journey with Starbucks, Alstead was asked to join the team developing the company’s global business. With a life-long interest in international studies and an appreciation of other cultures, the assignment was a natural fit. At that point, in 1996, Starbucks had about 1,000 stores in the U.S. and Canada. It also had a lot of skeptics outside the company who doubted the company could succeed in overseas markets.

“We heard the same doubts when Starbucks expanded to California.  People thought coffee was a Seattle thing, or maybe for the northern cold belt of the country,” recalled Alstead. “Today, the runway for growth for Starbucks around the world is remarkable.”

Before the end of 1996, Starbucks had opened stores in Japan and Singapore. Starbucks is now in 66 countries and he said in many ways the company is “just getting started” outside North America. China is the fastest growing market for Starbucks which is opening, on average, one store every 18 hours there.

Alstead credits baristas who wear the green apron for the company’s growth saying the Starbucks Experience comes to life in their hands.

“While we have the most amazing coffee anywhere, it is brought to life by how they make the beverages and how they speak to the customers about it, and the environment they create in the stores. That is everything for us,” Alstead said. “We’ve known that since the beginning.”

His advice to Starbucks store partners just beginning their careers is to do what you love, value the people around you, and serve others. “If you can find a way to do that in any career field, you’ll find meaning through work.”

In the months ahead, Alstead will continue to serve others through several volunteer projects that are important to his family and community. He’ll also pursue non-profit work related to his passion for ocean preservation. And, he’ll ride his motorcycle and scuba dive more too. “I’m going to be busy,” he said with a smile, quickly adding that he’s going to continue starting every day with his favorite cup of Starbucks® Sumatra coffee, with an aroma that will now remind him of 23 “amazing” years with the company.

“I’d say Starbucks changed my life, but it’s bigger than that,” he said. “Starbucks created and shaped my life.”

Next week, the Starbucks Newsroom will feature the incoming president and chief operating officer, Kevin Johnson. 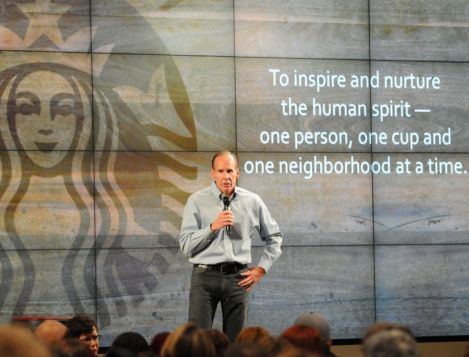