SEATTLE, 2015-5-22 — /EPR Retail News/ — “Everyone told me when you leave the military you’ll never find the camaraderie you have now,” said Mike Campbell, a U.S. Navy veteran. “I actually found it on day one working at Starbucks.”

Campbell is one of 3,700 partners (employees) with a military affiliation who have joined Starbucks since the company announced its commitment to hire at least 10,000 veterans and military spouses by the end of 2018. He’ll be managing a new type of store that connects Starbucks with military communities through relationships with veterans’ service organizations.

Today, Starbucks is opening a Military Family Store near Hill Air Force Base run primarily by veterans and military spouses.  The store is located just outside the gate of the base in Clearfield, Utah. The area, about 30 miles north of Salt Lake City, has a population of 5,500 active duty airmen on base.

The new store in Utah is one of at least 12 Military Family Stores Starbucks will dedicate nationwide before the end of 2015 to recognize the sacrifices and leadership of service members. Earlier this year, Starbucks dedicated a Military Family Store near Camp Pendleton in Southern California. More Starbucks stores will receive the special designation in July, including locations near these military bases: Ft. Carson, Colorado; Ft. Belvoir, Virginia; Travis Air Force Base, California; Ft. Sam Houston, Texas.

Each Starbucks Military Family Store teams up with a nonprofit partner organization in their community. The location near Hill Air Force Base is working with Team Red, White and Blue to help military personnel transition from military to civilian life.

“It is life changing for veterans and their families when they leave the service,” said Mark Taylor, outreach coordinator for Team Red, White and Blue. “We are honored to work with Starbucks to help veterans’ and their families become involved in their communities through social activities, volunteer service and special events.”

“I feel at home in my new store. We want to make service members and their families feel the same way,” said Campbell, the store manager. “We’ll greet people in uniform by saying, ‘Thank you for your service.’ I remember how much those words of thanks meant to me when I was in the Navy.”

Campbell joined the Navy in 2004 and served in both the Asia Pacific region and the Middle East. With a wife and two children at home, being away from his family “wasn’t good for me or for them,” he said. After 10 years in the Navy, Campbell left military service and wasn’t sure what to do next.

“I worked with hydraulics, pneumatics and electronics on weapons systems and taught people how to shoot rifles, pistols and shotguns. There’s not a large market out there for those skills,” he said.

Campbell’s brother suggested he “give Starbucks a try.” He discovered many of the attributes of military service translate well to his management role at Starbucks. While holding himself and his team to a consistently high standard of service, Campbell said he also shows “care for my comrades, in this case partners.”

‘Starbucks has become my family’

“Until Starbucks, I’d never worked at a place where I felt supported and felt like I belonged,” said Alyx Hoskovec.

In December of 2014, her husband – an Air Force F-16 aircraft engine mechanic – returned from a year-long tour of duty to discover he was being relocated from Arizona to Utah. As her husband settled into a new routine at Hill Air Force Base, she looked for a new job. Hoskovec said she sought out Starbucks because she “loves Starbucks coffee” and the way the company appreciates veterans every day, not just on Veterans Day.

She made an instant connection with the other veterans and military spouses hired to work in the new Military Family Store just outside the base.

“Starbucks has become my family,” Hoskovec said. “Before Starbucks I was looking for a place to belong. Now I’m excited to get up and go to work. It’s especially meaningful to be in this military store.”

It’s possible the Hoskovec family will have to relocate again. The average military family will move six to nine times in a 20-year career, according to the U.S. Department of Defense. But Hoskovec is no longer worried about what she would do if that happens.

“I know that the company has stores near most bases,” she said, “and if we have to move again I’ll find another Starbucks to work for. It’ll feel like home no matter where we might go.” 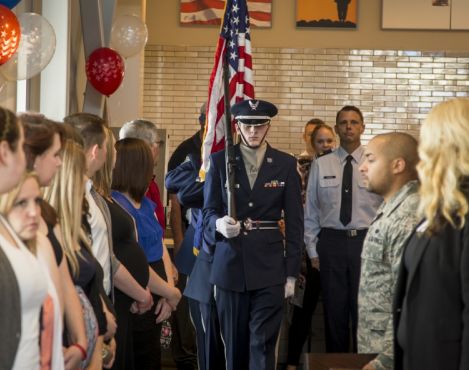