“Target got a head start going into Black Friday with the record-breaking launch of Adele’s new album and our ‘10 Days of Deals’ promotion. The momentum continued with our Black Friday presale, and on Thanksgiving, we saw millions of shoppers take advantage of great offers online and in our stores. Overall, the response from our guests has been very positive, with some of the best days we’ve seen on Target.com,” said Brian Cornell, Chairman of the Board and CEO Target, who greeted holiday shoppers at the Jersey City Target Store in New Jersey on Thanksgiving. “We expect to see the demand continue throughout the weekend and into December as we offer more savings on the year’s most popular gifts, including Star Wars and Apple products.”

Target’s “10 Days of Deals” began Sunday, Nov. 22, giving guests daily offers, including 10 percent off electronics and 20 percent off kitchenware. As part of the promotion, Target brought back the Black Friday pre-sale on Wednesday, Nov. 25. Sales were strong with the most popular items being Apple Watch and Apple iPads, Beats Solo 2 headphones, FitBit Charge HR and the Philips Sonicare 2 electric toothbrush.

Guests also continued to use the Order Pickup option at Target.com. Before 6 p.m. on Thanksgiving, the number of orders placed for in-store pick up increased by 35 percent as compared to 2014.

The Savings Continue—Spend $75, Get 20 Percent Off

Target’s “10 Days of Deals” continues through Tuesday, Dec. 1. Today, guests who spend $75 or more receive a 20 percent discount to use toward a future purchase on any day between Dec. 4 and Dec. 13. Additional offers include:

As always, guests can use their REDcard for an additional five percent off on top of other discounts. Online shoppers can continue to take advantage of free shipping on Target.com through Dec. 25. And the 21 million savvy deal seekers who use Cartwheel will continue to find thousands of offers throughout the holiday season.

About Target
Minneapolis-based Target Corporation (NYSE: TGT) serves guests at 1,805 stores and at Target.com. Since 1946, Target has given 5 percent of its profit to communities, which today equals more than $4 million a week. For more information, visit Target.com/Pressroom. For a behind-the-scenes look at Target, visit Target.com/abullseyeview or follow @TargetNews on Twitter.

Note: Target welcomes media to its stores. To contact your local store about shooting b-roll or photos or to request a local interview during the holiday season, please visit “Find a Store” at Target.com and contact the Leader on Duty.

media hotline
We strive to return all of our media inquiries within one business day.
email us (612) 696-3400 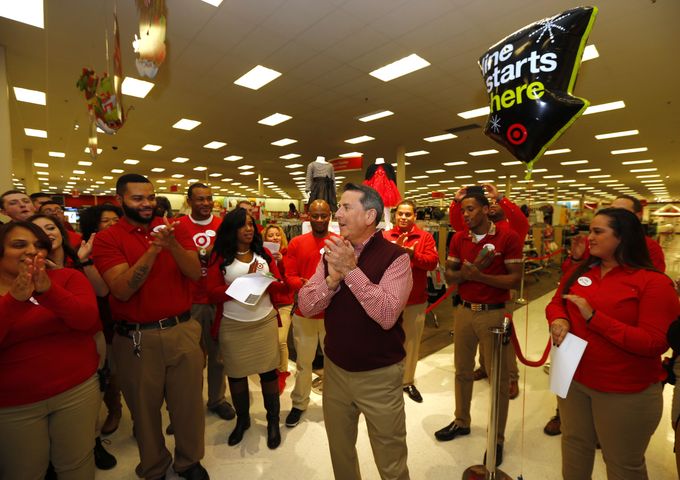 Target: Unprecedented results on Target.com and a strong turnout in stores on Thanksgiving Day