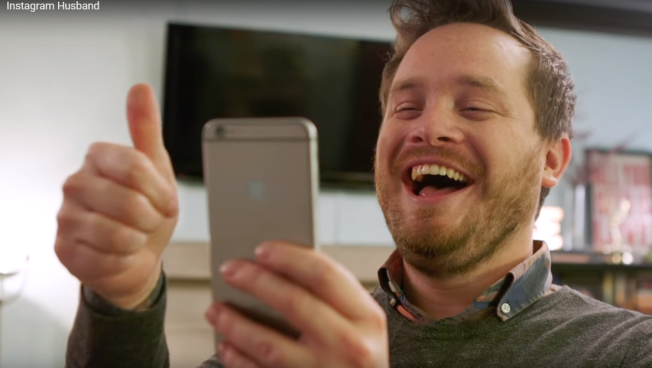 In the past week, Nate Black has gone from Best Buy employee to Internet sensation.

MINNEAPOLIS, 2015-12-17 — /EPR Retail News/ — Nate is one of the stars of “Instagram Husband,” a comedy sketch in which husbands complain about having to take photos of their wives for the social media platform. The short video spoof has gone viral, generating more than 4 million views on YouTube in just eight days.

The sketch first aired earlier this month on an episode of “The Mystery Hour,” a late-night local TV show in Springfield, Missouri, for which Nate is one of the writers. He often appears on the show with host Jeff Houghton, whom he first met while doing local improv.

We caught up with Nate, who works at our store in Springfield, to find out how his sudden online stardom is treating him.

What has it been like to watch the video take off over the past few days?

It’s weird. We’ve been doing this show for a really long time and we’ve done so many videos, and this was the first one that went viral. The other day, I was in here counting drawers and my mom started blowing up my phone because she saw me on the Today show. Immediately, I walked out and started showing everybody I could find. And Jeff, the host of “The Mystery Show,” just did an interview with CNN and appeared on an early-morning talk show in Australia. We’ve never experienced this before. The last week has been insane.

Do people recognize you at work?

On Saturday, I probably had five or six people walk up to me at Best Buy and say, ‘Hey, great video, man!’ And it’s even weirder with co-workers because I’m not a huge self-promoter. They’re texting me and pulling me aside at the store and saying, ‘I saw you on this mom blog that my wife goes to’ and stuff like that. One came up to me and said, ‘My cousin, who lives in Kansas City, sent me this video. Can I take a photo with you, so I can prove I know the guy in that video?’

Is there more pressure now to seize the momentum and come up with another viral hit?

Absolutely. We have three or four really good ideas that we’ve been sitting on. This was just the one that we felt like we had to do it now. We’ve got other ideas, and now everyone keeps shooting me ideas. It’s so cool, but we don’t run a YouTube channel, we do a late-night talk show. So that’s kind of the relief for us. If we focus on just another YouTube hit, we won’t be able to do a show, and that’s what we want to do.

What does this mean for the show?

It will be interesting. We’ve been doing this show for so long, and it’s been gaining traction year over year, but nothing like this. This video gives us instant credibility. I think it will be really good for our show. I think it will blow it up.

What’s your plan for the future?

I don’t know. I love working for Best Buy. In terms of the creative stuff, I’d love to continue doing improv and see “The Mystery Hour” really take off to the point where it could be a full-time job. Honestly, I have no idea.