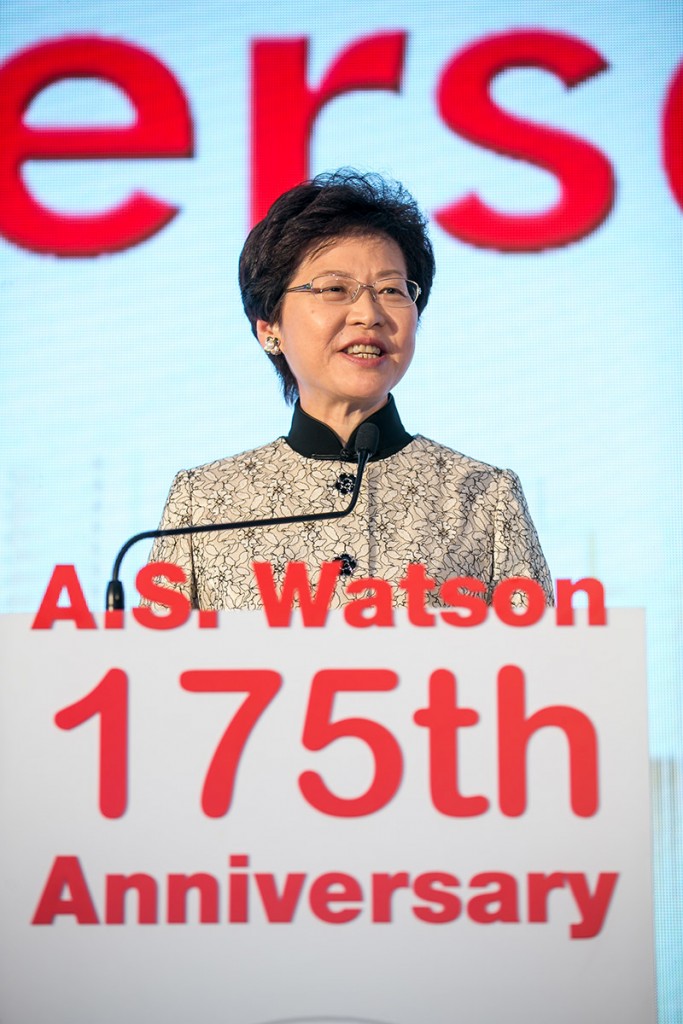 Mrs. Carrie Lam, GBS, JP, Chief Secretary for Administration, Hong Kong SAR Government congratulated the A.S. Watson Group at its 175th Anniversary cocktail on being one of the longest-standing companies in Hong Kong, and on its world-leading position in retail.

Hong Kong, 2015-12-17 — /EPR Retail News/ — 175 years ago, a small dispensary opened in Hong Kong as one of the very first pharmacies in the city. Today, this Hong Kong-based dispensary, the forerunner of A.S. Watson Group (the “Group”), has grown into the world’s largest international health and beauty retailer, with over 12,000 stores operating in 24 markets in Asia and Europe. Established in 1841, the Group will celebrate its momentous 175th anniversary in 2016. The celebrations kicked off with a cocktail event today officiated by Mrs Carrie Lam, GBS, JP, Chief Secretary for Administration, Hong Kong SAR Government and Mr Wu Siu-hong, MH, Champion of the 51st QubicaAMF Bowling World Cup.

Mr Dominic Lai, Group Managing Director of A.S. Watson, remarked on the journey of one of the longest standing companies in the city. “We were the 15th company registered officially in Hong Kong. Over the years, the Group has grown from a small local dispensary to the world’s largest international health and beauty retailer. We are proud to have taken a Hong Kong-based company to a leading position on the world retail landscape.”

According to the Deloitte Annual Global Power of Retailing Report, the Group ranked 48th last year amongst all retail companies in the world. In Hong Kong, the Group operates over 620 stores and is one of the largest employers with over 12,000 employees across its retail and manufacturing businesses.

As well as contributing to the city’s economic development, the Group is also one of the most active companies in social responsibility in Hong Kong. In the last two years alone, the Group has invested more than $24 million in the areas of youth education, health and caring community activities. Our commitment to the community has gained widespread recognition; the Group won the Asia’s Best Employer Brand Award, has been named Distinguished Family-friendly Employer, and won the Social Capital Builder Award and the Asia Responsible Entrepreneurship Award 2015 – Social Empowerment.

In celebration of the 175th anniversary milestone and to support the government’s “Appreciate Hong Kong” campaign, the Group will launch Project LOL, a philanthropy programme focusing on supporting the society in three areas – health, education and caring community. Project LOL is about bringing “Lots of Laugh, Lots of Love” to the people of Hong Kong. It is also about encouraging people to show appreciation to each other and to be positive and energetic in helping make Hong Kong, our home city, a better place. The programme will be kicked off with a large-scale care for elderly activity in April 2016 when the Group will mobilise the commercial sector to join forces in visiting and bringing love to 1,750 singleton elderly.

Officiating at the launch of the Project LOL, Mr Wu Siu-hong, the first Hong Kong athlete to win the 51st QubicaAMF Bowling World Cup said, “A.S. Watson Group has a long history of supporting sports development in Hong Kong. Its Watsons Water is also a strong supporter for tenpin bowling events. I’m so glad to see the launch of this Project LOL to bring lots of laugh and love to the city and to serve more needy in the community.”

In addition, to mark the occasion of the Group’s Anniversary, a special edition $175 gift coupon was unveiled. The coupon is specially designed with an illustration showing one of the first Watson’s The Chemist stores, in Alexandra House, Central. The coupon has value as a memento, and can also be used across all of the Group’s retail outlets in Hong Kong, including Watsons, PARKnSHOP, Fortress and Watson’s Wine. The quantity of the special edition gift coupon on sale will be limited to 30,000 and will be opened for sale in January 2016 in all of the Group’s retail outlets in Hong Kong. Another 3,000 coupons will be given away to our customers via social media and activities to thank their support over the years. The full collection of historical sketches is available on our corporate website: www.aswatson.com/175.

The Group’s 175th Anniversary celebration will begin in January 2016 and will last for the full year. In Hong Kong, specially designed collectable bottles of Watsons Water will hit the market in February; Watsons will also offer customers free trips to selected markets in which the Group operates as lucky draw prizes, and over 200 happy customers will enjoy free shopping every week in April. Special loyalty club member promotions will be available from all of our retail brands, including Watsons, Fortress, PARKnSHOP and Watsons Wine, throughout the year. Over 240 celebration activities have been planned across the globe in all the Group’s 24 operating markets, to recognise the support of our customers, employees, business partners and the communities in which we operate.