Zara opens the doors of its new 47,361 ft2 flagship store on 503-511 Broadway today. With an unbeatable location in the heart of Manhattan’s SoHo neighborhood, one of the world’s best known shopping districts, this new location on the block between Broome and Spring Streets represents some of the best late-nineteenth century retail architecture in the city.

Inditex Chairman, Pablo Isla, has underscored the importance of this opening and stressed that “it is particularly relevant for several reasons: the quality and size of its location, the environmental component that promotes the goals of our eco-efficient store project, its design, and its technological proposal. From today forward this new flagship will undoubtedly be a global benchmark”.

Manhattan’s newest Zara boasts three floors of retail space, ample room for showcasing everything the brand has to offer women, men and kids for Spring/Summer 2016. The store is designed entirely by Zara’s architecture team, who were faced with the challenge of blending the city’s past with its future. Massive effort was made to recover the building’s landmark features. Its original cast iron façade, interior and brick wall, which now blends with a rationalist and airy interior that features beauty, clarity, functionality and sustainability, the guiding principles of Zara’s image.

In keeping with Inditex Group’s aim to have 100% eco-efficient stores by 2020, Zara SoHo sets the standards for highly demanding sustainability measures across all its processes, combining these efforts with energy efficiency and recycling in order to consume 30% less energy and 50% less water compared to a conventional store. Backed by these sustainability-oriented features, Zara SoHo has applied for LEED (Leadership in Energy and Environmental Design) certification, awarded to green buildings by the U.S. Green Building Council (USGBC), a third-party organization.

Zara’s new SoHo venue, purchased by the brand in 2015, was built in 1878 by architect John B. Snook and is one of the emblematic buildings found in the area known as the SoHo Cast Iron Historic District, named for the widespread use of this material.

Zara now boasts eight stores in Manhattan, where the brand opened its first store outside of the Iberian Peninsula in 1989, after setting up shop in the city’s most popular shopping destinations including Fifth Avenue, Lexington Avenue, and 34th Street. Zara also opened a new store at 222 Broadway in late 2015, taking over a new space in the heart of the city’s Financial District.

From San Diego and Seattle to Houston, Honolulu and New York, Zara has opened the doors of major new stores across the US in 2015. After unveiling the new Zara SoHo, Inditex Group now has 75 stores in the country (71 Zara and 4 Massimo Dutti stores), and customers in the US can also shop Zara Home online, the Group’s home textile and décor brand. 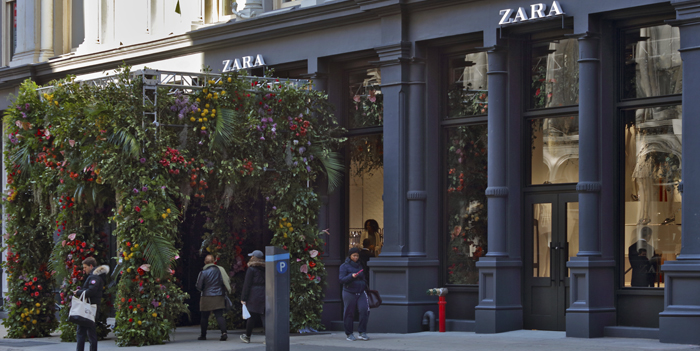