LOS ANGELES, 2016-May-31 — /EPR Retail News/ — Ralphs invites customers to join in supporting the men and women of the armed forces and their families during its annual Honoring Our Heroes campaign in partnership with the USO.

To honor our heroes, Ralphs and other Kroger-family stores, together with customers and employees, are raising money to support the USO’s broad range of programs that assist service members and their families. Since 2010, The Kroger Co., of which Ralphs is a division, has provided more than $12 million to support the USO – the largest cumulative gift to the USO in the organization’s history.

This year, customers and associates of Ralphs will be able to show their support for our service men and women from May 25 to July 19 by donating their spare change in specially-marked coin boxes at the check stands in all Ralphs supermarkets. One-hundred percent of all donations will go to the USO.

“The USO supports our military and their families in so many ways—from being right there for the wounded, injured and ill, to helping those who are on deployment record a bed time story for their children,” said Kendra Doyel, Ralphs’ vice president of  corporate affairs. “The USO connects with our service men and women every step of the way, and Ralphs is proud to honor our troops and veterans by supporting them.”

Honoring Ralphs’ Heroes
Ralphs is also recognizing company employees and their families who are active and former military members, including Joseph Humphries who works at the Ralphs at 1500 Moorpark Road in Thousand Oaks.

Humphries is United States Navy veteran, who was wounded in Afghanistan. He says working Ralphs has helped ease his transition from active duty in the military to civilian life because Ralphs is a “military friendly” company.

“My managers at Ralphs have been very accommodating and understanding,” says Humphries, who served in the Navy from 2007 to 2010 and was assigned to the aircraft carrier USS Ronald Reagan.

Customers can read more stories like Joseph Humphries’, and learn how to volunteer with the USO or make a donation, by visiting www.honoringourheroes.com.

About Ralphs
Ralphs Grocery Company was founded in 1873 and currently operates 204 supermarkets from its headquarters in Los Angeles. Last year, Ralphs contributed more than $6 million to support education, hunger relief, women’s health and local nonprofit organizations in the communities served by the company’s stores. Ralphs is a subsidiary of The Kroger Co., (NYSE:KR), one of the nation’s largest food retailers, based in Cincinnati, Ohio. For more about Ralphs, please visit our web site at www.ralphs.com. 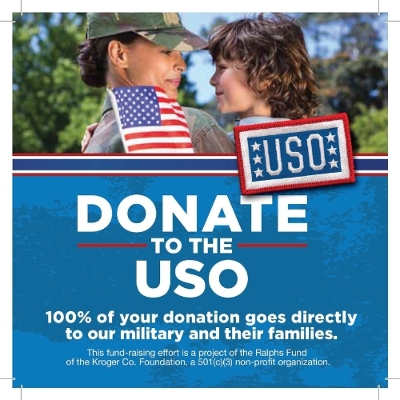