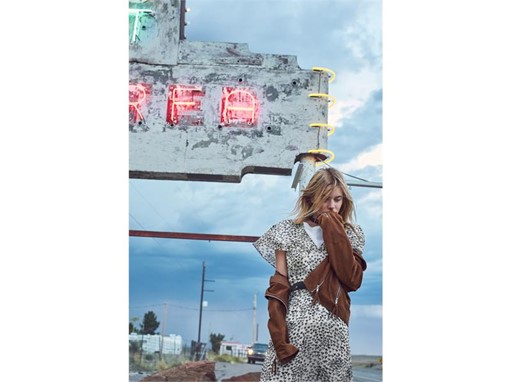 Barcelona, 2016-Sep-06 — /EPR Retail News/ — The short film is the format chosen by MANGO for its new digital project, featuring the collaboration of the model and actress Camille Rowe, the creative director and model Julia Restoin Roitfeld and the actress, model and singer Alma Jodorowsky. Each one stars in a story about a journey inspired by aspects of their personality and in turn interprets the values of MANGO: modernity, femininity and positivity.

The first will be launched on 13 September, with Camille Rowe as the protagonist. The film, set in Marfa, transports Camille to the 30s alongside the legendary Bonnie and Clyde, who inspire the theme of the short film. The story of Bonnie Parker, a heroine of Camille, awakens her spirit of adventure and leads her to go on a road trip through the Texas desert. The mixture of French and American cultures and her bohemian, carefree and unconventional spirit make her the ideal ambassador to reveal the modern version of the MANGO woman.

Julia Restoin Roitfeld will star in the second one, whose plot will be revealed in October. This film will reveal what femininity means to her and how it is a part of her life, her passions and her environment. Julia is influenced by her considerable experience in the world of fashion, photography and creative directing, after having worked with top designers. Having grown up under the wing of a maternal figure so influential in the world of fashion has influenced the way she sees femininity.

Finally, Alma Jodorowsky will star in the third and final chapter of this mini-series, which can be seen in November, whose theme is positivity. Alma has worked as a model and an actress, both in film and on stage. She has starred in films such as Blue is the warmest colour and, more recently, Kids in Lovealongside Cara Delevingne. She is also part of the electronic duo Burning Peacocks, in which she is also a lyricist. Being the daughter and grand-daughter of artists, creativity and art are part of her DNA and are reflected in her charismatic, positive and fresh image.

MANGO was founded in 1984 and is today one of the leading fashion groups in the world. Based in its city of origin, Barcelona, the company has an extensive store network of 800,000 m2 in 110 countries.From its “El Hangar” Design Centre in Palau-solità i Plegamans, every year it designs 18,000 garments and accessories for wearing the season’s trends. The company, which owns the MANGO Woman, Man, Kids and Violeta lines, closed 2015 with sales of 2.327 billion euros, representing a 15% increase on 2014 and an EBITDA of 170 million euros. More information at www.mango.com