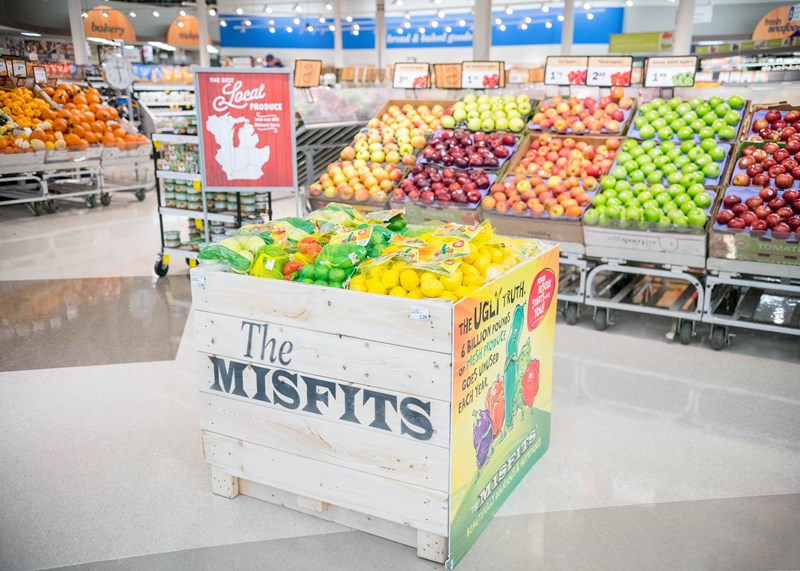 Meijer now offers a unique line of Misfits® produce that helps connect shoppers to tasty but cosmetically-challenged fruits and vegetables at a reduced price. Delivered daily to 235 Meijer stores across the Midwest, the packaged fresh produce may be discolored, scarred or odd-sized, but offers the same taste, freshness and quality of other produce the retailer carries.

The Misfits program rolled out at all Meijer locations earlier this month, and customers have already purchased nearly a quarter of a million pounds of fresh, perfectly-imperfect produce. The Misfits program is made available through working with Robinson Fresh®. As a division of C.H. Robinson, the company is one of the world’s leading providers of produce, working with farms to repurpose fruits and vegetables that might not make it to your grocery store due to their appearance or shape.

“Meijer offers more than 600 types of produce, so the Misfits program has been an incredible extension to our overall selection,” said Peter Vail, Vice President of Produce, Deli and Bakery for Meijer. “There is an inner beauty of this perfectly-imperfect produce. Our customers have responded well to the produce made available through the Misfits program.”

Currently, the United Nations estimates between 20 percent and 40 percent of produce harvested each year is thrown away because it does not meet accepted standards for store shelves. Nearly half of the available food supply in the U.S. is never eaten, according to the National Institutes of Health, wasting an estimated 35 tons of food per year. When food waste cannot be donated to feed hungry people, Meijer strives to recycle it through composting, anaerobic digestion or animal feed. Last year, Meijer recycled over 47.8 million pounds of food waste.

“We understand there is produce left in the field because farmers don’t think there is a market for it,” says Craig Arneson, Robinson Fresh general manager of the north region. “With the Misfits program, farmers have an outlet to sell more produce and customers have an opportunity to save money and help reduce waste.”

Local growers like River Ridge Farms from Sparta, Mich., have been part of Meijer’s Locally Grown program for 27 years and is one of the farms finding this new way to bring freshness to stores.

“Growers work hard to try and grow apples with the perfect shape, color and size, but since apples are grown outside, they may end up with an odd shape because it grew around a branch or has low color due to growing in a shady spot on the tree,” said Don Armock, president of Riveridge Produce. “Teaming with Meijer on the Misfits program, growers have an opportunity to sell imperfect, but great tasting fruit while the consumer gets to save on fresh produce while maybe even getting a laugh out of its odd look.”

Misfits produce items vary week to week based on their availability and are sold at a discount of between 20 to 40 percent; some of the seasonably-available produce has included apples, bell peppers, lemons, limes and sweet potatoes. Customers should look for prominently displayed Misfits bins and signage in the produce section of their local Meijer store.

Meijer is a Grand Rapids, Mich.-based retailer that operates 235 supercenters and grocery stores throughout Michigan, Ohio, Indiana, Illinois, Kentucky and Wisconsin. A privately-owned and family-operated company since 1934, Meijer pioneered the “one-stop shopping” concept and has evolved through the years to include expanded fresh produce and meat departments, as well as pharmacies, comprehensive apparel departments, pet departments, garden centers, toys and electronics. For additional information on Meijer, please visit www.meijer.com. Follow Meijer on Twitter @twitter.com/Meijer and @twitter.com/MeijerPR or become a fan at www.facebook.com/meijer.

Robinson Fresh and Misfits are both registered trademarks of C.H. Robinson Worldwide, Inc.