The banner’s arrival in the Caribbean Coast region – where it should close 2015 with around 40 stores – is taking place this week, with the opening of seven stores in the cities of Barranquilla, Cartagena and Santa Marta.

Expansion is taking place to the main areas of the Caribbean Coast – Atlántico, Bolívar and Magdalena are three most important departamentos of the seven which make up the Coast region – following Ara’s warm welcome in the Coffee Belt and in Valle del Cauca, where it already has 94 stores and around a thousand employees.

The Ara chain, whose value proposition is based on low prices, high quality Private Brand, strong promotions and major presence in the neighbourhoods, started doing business in March 2013, when it inaugurated the first distribution centre and the 1st store, in the city of Pereira.

Now that it is starting operations in a second region of Colombia, the Chairman of the Jerónimo Martins Group, Mr. Pedro Soares dos Santos, explains that choice: «More than 10 million Colombians live in the Caribbean Coast region and the areas where we are opening stores are situated in departamentos with a higher economic growth than the average for the country, despite around a third of the population from the Coast living in poverty. We want to make quality food accessible to all these people, especially through the investment we are making in developing Private Brand products with a very good quality-price ratio, in conjunction with Colombian suppliers».

Pedro Veloso, Managing Director of Jerónimo Martins in Colombia, highlights the local spirit of the chain: «Ara stores are another neighbour in the neighbourhoods where they are present, with the best products at everyday low prices, with the capacity to create emotions, make people smile and convey happiness. That is exactly the kind of party spirit and fun that can be experienced at the openings on these days».

By December 2015, the chain will have created around 500 new jobs in the Caribbean Coast region.

Ara is a brand inspired by the happiness of the Colombian people, the colours and richness of the country’s biodiversity, offering “Happiness at the best price”. 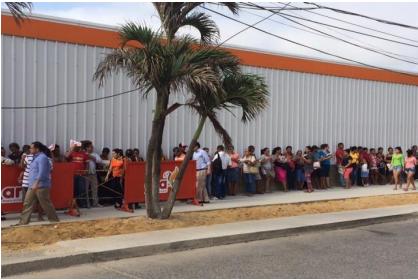 Thousands of people waiting for the stores’ opening