MANCHESTER, UK, 2017-Nov-07 — /EPR Retail News/ — Hundreds are set to sleep out in support of homeless people this Friday (10 November) as the Booth Centre hosts its annual Manchester Sleepout.

A record number of people have registered to take part in the event which is taking place at the city’s Cathedral.

The Manchester Sleepout is designed to bring the community together, raising vital funds and increasing awareness of how the Booth Centre works to bring about positive long-term change to the lives of those who are homeless, or at risk of homelessness, in the city.

The Co-op has also joined with the Booth Centre to launch an appeal for tinned food and toiletries. Items can be dropped off at 20 of its stores in and around Manchester including those in High Street; Corporation Street; the Green Quarter and, Stretford Road, Hulme. The Co-op is also among a number of Manchester-based businesses to take part in the Sleep Out, raising much needed funds and awareness.

It has also been announced this week that The Booth Centre is set to be a beneficiary of the Co-op’s Membership scheme from later this month – the local community fund not only sees Members receive a 5% reward every time they swipe their Membership card when buying own-brand products, but also the community retailer donating a further 1% to local good causes and charities who contribute to improving local life.

Amy Hinks, Development Manager, Booth Centre, said: “We have been delighted with this year’s response with over 400 people now registered. We see first-hand the hardships that homeless people face day after day. The Manchester Sleepout does not aim to replicate what it’s like to sleep rough, but to raise vital awareness of what people go through and how difficult it can be. We know that with the right support lives can be turned around. The reasons why people find themselves sleeping rough are many, and at this time of year in particular they face cold, hunger, fear, loneliness and social isolation daily.

“At the Booth Centre we provide a variety of different services to help people rebuild lives, including arts and sports sessions, education and training workshops, employment advice and support in finding and moving into accommodation – together we can raise funds and awareness which can make a difference to the lives of people locally in crisis.”

John Paul Hooper, Area Manager for the Co-op in Manchester, said: “We are pleased to support this appeal which is working to raise awareness and confront the many challenges that homelessness brings – as a co-operative, inclusivity and equality is at the centre of what we do and teaming up with the Booth Centre can help to make a difference to people living in our community who are desperately in need of support through both practical help and, guidance towards accessing the right support and services.”

SEATTLE, 2015-4-15 — /EPR Retail News/ — Not too long ago, Jenna Williams was on the other side of a Starbucks counter. The 23 year old recalled many days she’d come into the downtown Denver Starbucks store just to get warm.

“I always asked the baristas if it was okay for me to sit inside for a few minutes, or if they were busy I’d stand out of the way in a corner,” Williams said. “I never wanted to bother people in the Starbucks. In fact, I never wanted to be a bother to anyone.”

Today, she’s wearing a green apron, pulling espresso shots, and laughing with customers in the same store she used to huddle in on the cold, snowy Denver days when she had no place to call home.

The road from homelessness to full-time employment isn’t easy, but it’s one that nonprofits and Starbucks are working to pave for thousands of young adults often referred to as Opportunity Youth – those between the ages of 16 and 24 who are not in school and are not working. Many Opportunity Youth are also homeless.

The myth of street life

It’s a myth that young people who are homeless prefer the independence of living on the streets.

“I was miserable, depressed, tired of struggling to find food, tired of being dirty all the time,” said Williams. She had been homeless off and on from the age of 16, usually sleeping in abandoned houses, in alleyways, or under bridges.

Williams often thought. “I’m better than this,” but didn’t believe it until she walked into Purple Door Coffee in downtown Denver, Colorado a little over a year ago. The nonprofit coffee shop employs homeless young adults, and holds them accountable for completing a one-year curriculum involving customer service and work skills, holding a job, and improving their physical and emotional wellbeing.

Purple Door co-founder Madison Chandler started the coffee shop and skills training program two years ago after realizing the problem for many homeless young adults was keeping a job for more than a couple of weeks. They needed a more structured, disciplinary “and more gracious” environment to learn in, she said.

“Many of them never had a good work ethic modeled by their parents or the adults around them,” Chandler said. “If they didn’t feel like going to work, they didn’t. The people we bring into the program learn to adapt to structure, as they receive encouragement and often discipline too.”

Jenna Williams is an example of someone who needed not only encouragement, but discipline too. She used up all of her sick days for the year in the first two months of the program. Williams learned if she wanted to work at Purple Door she had to show up no matter what.

Part of a job training program’s success rate is measured by whether the person who completed it is still employed six months later. While the average success rate for most programs is 20 percent, for Purple Door it’s about 50 percent, in part because of the one-on-one attention the young adults receive.

“I’ll be honest with you, this job is exhausting,” said Chandler. “It’s tiring to work in a café and to be coaching people who come from an erratic background can be discouraging sometimes too. When we see someone decide they want to make a change, it’s so uplifting though. It reminds me of why we do this.”

‘We are all here to help one another’

After completing Purple Door Coffee’s one-year program, Williams walked into the downtown Denver Starbucks store she’d been in many times before. This time, she wasn’t there to get out of the cold. With a nervous smile on her face and resume in hand, she was there for a job interview.

Store manager Chelsea Curphy, a five-year Starbucks partner, said Williams had “a little bit of grittiness” and a positive attitude – two things she looks for in hiring baristas.

“Jenna also reminded me of my best friend in elementary school who didn’t necessarily have the easiest life, but was a super bright and positive person,” she said. “Jenna had amazing job recommendations from Purple Door and she answered all my questions.”

She was hired, but getting a job and doing the job are two different things. Curphy said she had to alter her training style a bit and provide more one-on-one attention with Williams. Fellow store partners helped too, because, as Curphy noted, “We are all here to help one another.”

“I’ll admit I panicked and cried a lot during the first two weeks and thought, ‘I’ll never be able to do this job, it’s complicated,’” Williams said. “I took a deep breath, remembered all that I was taught, wasn’t afraid to ask for help and I’ve been unstoppable ever since.”

The face of Opportunity Youth

Williams’ story has caught the attention of local and national media and a crew filming a documentary about homelessness.

“It took me awhile to get my life straight, but now that I’ve been given a great chance I want to help others too by putting a face on homelessness and helping others realize we all want the same thing – an opportunity to lead a good life,” she said.

On Friday April 17, about 100 Starbucks partners will join the Denver-based nonprofit Urban Peak, which has a connection to Purple Door. Volunteers will work on several community service projects to benefit young people during Starbucks Global Month of Service. This year there’s an emphasis on volunteer efforts that support Opportunity Youth – young people ages 16-24 who are not employed or in school. Starbucks plans to hire 10,000 Opportunity Youth by the year 2018.

Join a volunteer project near you through this Starbucks community website, and follow the global effort on social media via the hashtag #extrashotofgood. 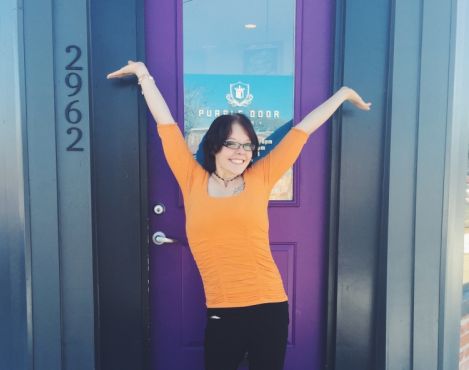