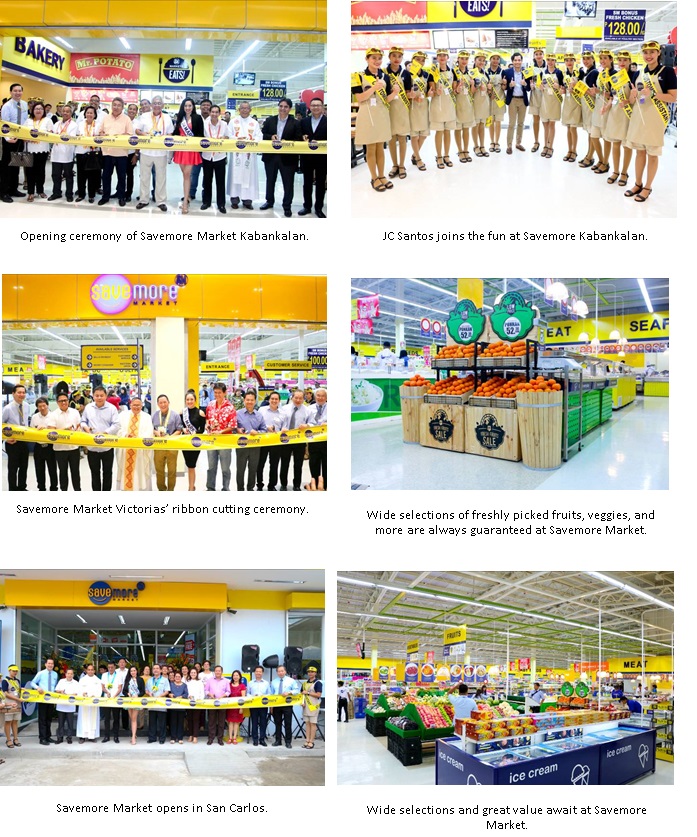 “We continue to expand while taking into consideration the changing needs of the market. With more communities outside of Metro Manila still with minimal access to groceries and with the worsening Manila traffic, shoppers need a complete source of daily and weekly essentials that do not require them to travel far,” Savemore Market President Jojo Tagbo said.

With its consistent solid performance, Savemore Market was recognized by six different cities and municipalities in the Philippines as their top tax payers for 2016 adding more trophies to its previous recognitions. Majority of Savemore Market’s branches are also recipients of DTI’s Gold Bagwis Seals for service excellence. And by upholding SM’s standard of service, Savemore Market received the 2015 Best Supermarket award from the Philippine Retailers Association joining previous winners SM Supermarket and SM Hypermarket.

Savemore Market gives back to the community by supporting local government initiated campaigns like Diskwento Caravans, clean-up drives, and Brigada Eskwela. In fact, Savemore Market was given the Hall of Fame status by DepEd Lucena City in Quezon province for its contributions to DepEd’s Adopt-a-School program. Large electric fans to help ventilate several churches were also donated by Savemore Market through the Felicidad Sy Foundation. Savemore Market also implements programs like the SM Markets-wide Baryanihan where loose change is donated by shoppers for the benefit of a chosen underprivileged school and the Join the M.O.B. (My Own Bag) campaign which encourages shoppers to reuse shopping bags and reduce waste.