Bellingham, Wash., 2015-3-9 — /EPR Retail News/ — West Coast regional grocery chain Haggen will take ownership of the Albertsons store at 16199 Boones Ferry Road in Lake Oswego, at 12:01 a.m. Friday, March 20. The new Haggen is scheduled to open its doors to Lake Oswego shoppers at 4 p.m. on Saturday, March 21.  The store is the first of 20 stores in Oregon it plans to acquire and convert to the Haggen brand in the first half of 2015.

Once the acquisition is completed, Haggen will expand from 18 stores with 16 pharmacies to 164 stores with 106 pharmacies; from 2,000 employees to more than 10,000 employees; and from a Pacific Northwest company with locations in Oregon and Washington to a major regional grocery chain with locations in Washington, Oregon, California, Nevada and Arizona. The 26 Washington store conversions began in mid-February, and 83 California store conversions will begin in mid-March. The Nevada and Arizona stores will be the last to convert in the late spring. Each week, between one and 12 stores will be converted.

John Clougher, Haggen CEO Pacific Northwest, said, “We’re excited about the changes we’re making to enhance these stores, and we’re confident customers will like the new look, the new offerings, and their new full-service grocery destination.”

Haggen will take ownership and convert the 20 stores across Oregon in March, April, May and June, based on the following tentative sequence and schedule:

NOTE: The conversion schedule is subject to change.

The conversion schedule for each store will follow a similar timeline. The Safeway or Albertsons store will close down at 6 pm. Haggen will take ownership of the store just after midnight and begin the conversion. Both interior and exterior signage will change at all locations and every store interior will receive a fresh coat of paint.  Then about two days after the closure, the store opens as Haggen.

Clougher noted that the store offering will also change. “Haggen has built its 81-year-old business on providing excellent, locally sourced, fresh produce and high quality meats and seafood. That focus will definitely be reflected in the new stores.”

Haggen’s commitment to being local extends beyond its sourcing and into the communities around its stores. To get to know its neighbors and these neighborhoods better, Haggen is inviting community members that are interested in partnering with the brand to meet with company leaders soon after the conversions of the acquired stores. At these informal, public meetings, local farmers and producers can discuss selling their wares on Haggen’s shelves, non-profit organizations can learn about Haggen’s community giving, and small businesses can explore co-marketing programs.

“We hope community members will join us for a fun evening to learn about how we can work together to strengthen our community,” said Clougher.

Additionally, with each grand opening, Haggen plans to partner with five local non-profits, donating $1,000 to a single organization on the first day the store opens and 2% of daily sales to four additional organizations on four consecutive Saturdays.

Clougher said, “We have a long history of giving back to the communities we serve. We want to demonstrate that commitment as soon as we open our doors.”

About Haggen
Founded in 1933 in Bellingham, Washington, Haggen has built its business on providing guests the freshest and most local products with genuine service, while supporting the communities it serves. The company currently operates stores in Washington and Oregon, and is in the process of acquiring an additional 146 stores. With this acquisition, Haggen will expand from 18 stores with 16 pharmacies to 164 stores with 106 pharmacies; from 2,000 employees to more than 10,000 employees; and from a Pacific Northwest company with locations in Oregon and Washington to a major regional grocery chain with locations in Washington, Oregon, California, Nevada and Arizona. Throughout its eight decades in business, the company has supported regional farms, ranches, fisheries and other businesses, creating a lasting and sustainable local food economy. The company remains focused on building local, sustainable food economies as it expands. For more information about what’s happening at Haggen, visit haggen.com. 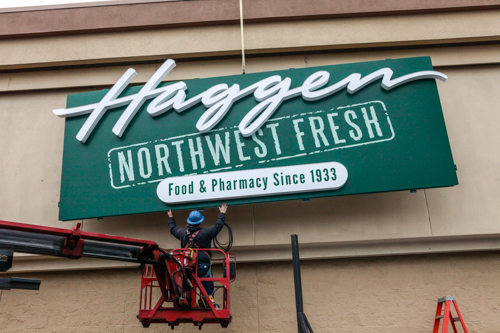