It began with one voice

SEATTLE, 2015-3-16 — /EPR Retail News/ — As racially-charged tragedies unfolded in communities across the country, the chairman and ceo of Starbucks didn’t remain a silent bystander. Howard Schultz voiced his concerns with partners (employees) in the company’s Seattle headquarters and started a discussion about race in America.

Despite raw emotion around racial unrest from Ferguson, Missouri to New York City to Oakland, “we at Starbucks should be willing to talk about these issues in America,” Schultz said. “Not to point fingers or to place blame, and not because we have answers, but because staying silent is not who we are.”

Partners were not silent. For more than an hour, at an all-hands meeting at the Starbucks Support Center, partners representing various ages, races and ethnicities passed a microphone and shared personal stories.

“The current state of racism in our country is almost like humidity at times. You can’t see it, but you feel it,” said one partner.

Over the past three months, more than 2,000 Starbucks partners have discussed racial issues at open forums in Oakland, Los Angeles, St. Louis, New York and Chicago.

In the midst of a conversation with partners in St. Louis, a soft spoken young man shared that he was proud to have reached the age of 20.

“The magnitude of that statement might have been lost on many in the room, but for me, it brought to light a deeply troubling situation. For some young people in our country, just staying alive is their biggest and most important accomplishment,” said Kelly Sheppard, a Starbucks 15-year partner who attended two of the forums. “How could that be in 21st century America with all of the promise and opportunity our nation provides?”

In each forum, partners demonstrated vulnerability and courage as they shared personal stories. It was clear to those who attended, the gatherings highlighted the mission and values of Starbucks, and the partners’ desire to do more.

Starbucks customers are invited to join the discussion

Baristas in cities where the forums were held said they wanted to do something tangible to encourage greater understanding, empathy and compassion toward one another. Given their willingness to discuss race relations, many partners wanted to begin conversations with their customers too. Partners in New York, Chicago, St. Louis, Oakland and Los Angeles have voluntarily begun writing “Race Together” on Starbucks cups. Partners in all Starbucks stores in the U.S. will join them today. Partners in Starbucks® stores may also engage customers in conversation through Race Together stickers available in select stores, and a special USA Today newspaper section arriving in stores later this week.

In addition, full-page ads in The New York Times and USA Today support the Race Together initiative, which will be further outlined during Starbucks 2015 Annual Meeting of Shareholders in Seattle on Wednesday.

Race Together is not a solution, Schultz acknowledged, “but it is an opportunity to begin to re-examine how we can create a more empathetic and inclusive society – one conversation at a time.” 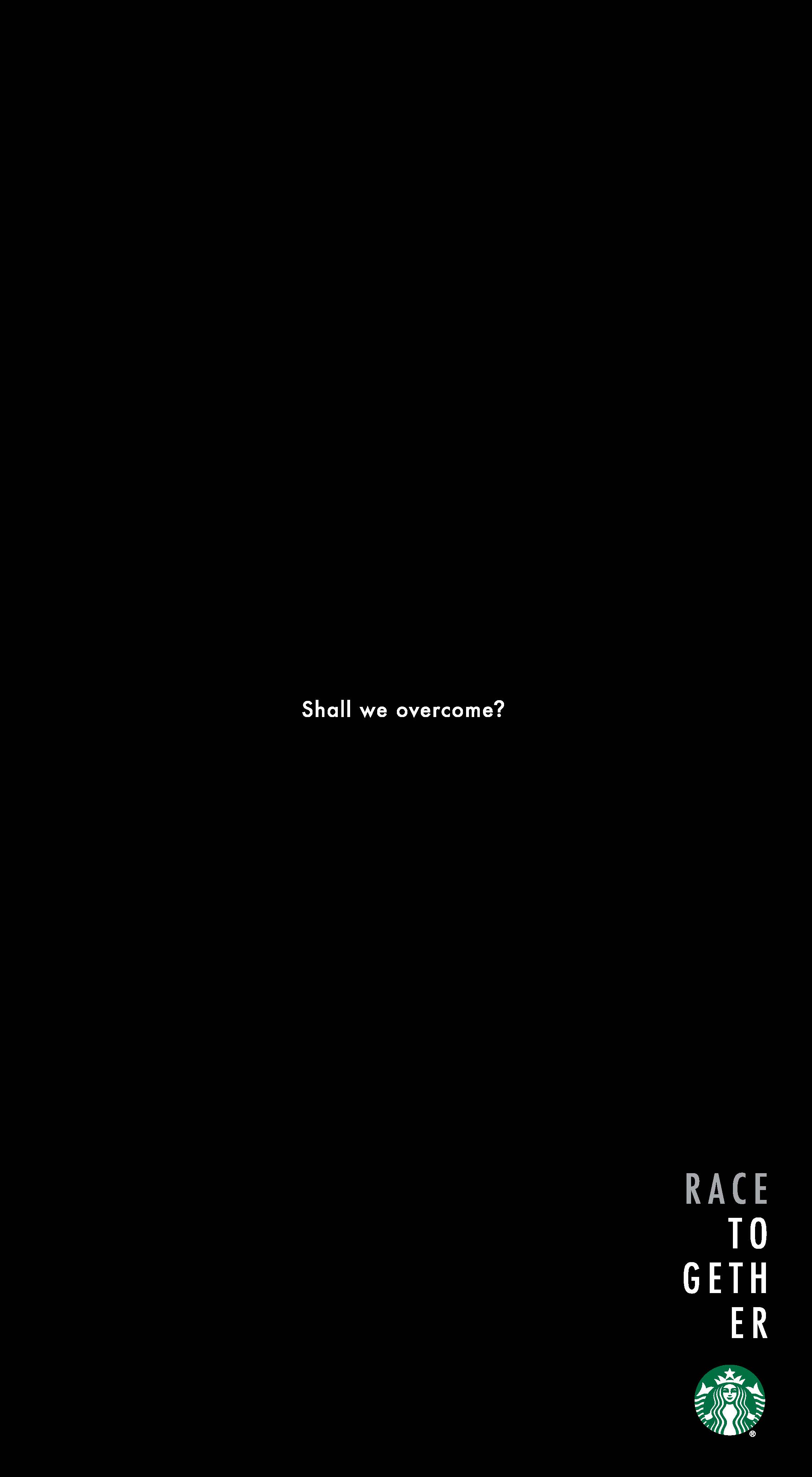 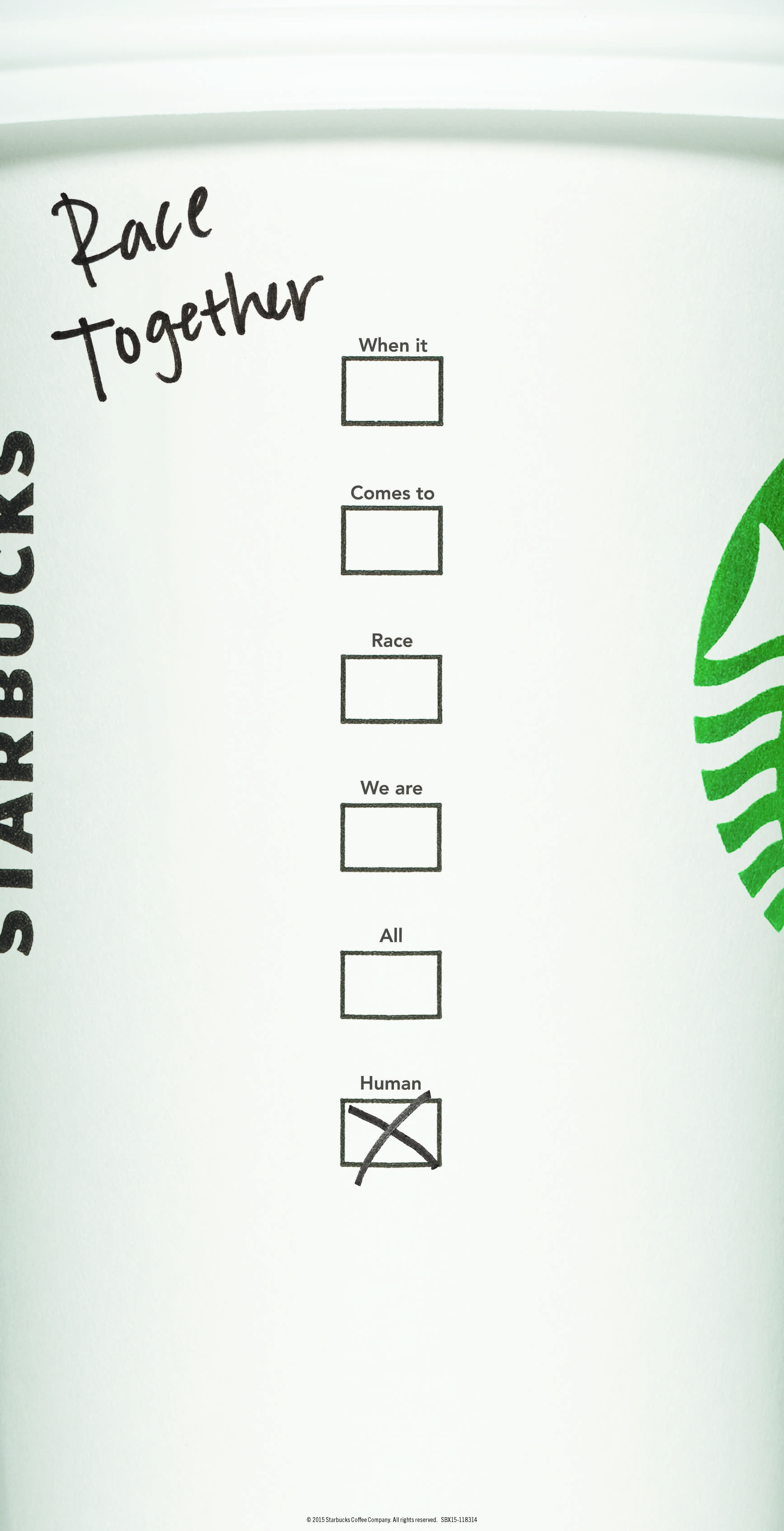 Join the conversation on social media through the hashtag #racetogether. Starbucks partners and customers can also share their experiences by emailing the Starbucks Newsroom. 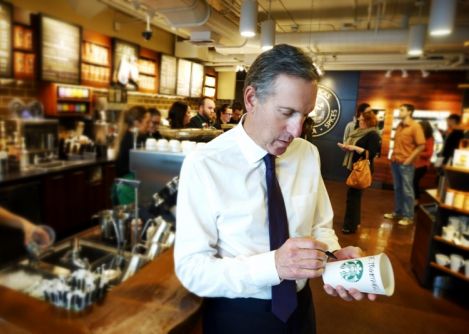 Starbucks partner at discussion about race in America: The current state of racism in our country is almost like humidity at times. You can’t see it, but you feel it