FORT LEE, Va., 2015-3-23 — /EPR Retail News/ — Deli and bakery services in 22 commissaries in 12 states face temporary suspension today as the Defense Commissary Agency seeks a new contractor. Six of the 22 commissaries have sushi bars that will also be temporarily suspended.

DeCA’s decision to terminate its two remaining contracts with Nayyarsons for its Great Lakes and Gulf Coast areas was made for the convenience of the commissary customer, said Defense Commissary Agency Director and CEO Joseph H. Jeu.

“It was a decision made in the best interest of our customers,” Jeu said. “I want our customers to know that we’re working diligently to get services back to normal.”

Consistent with earlier actions, DeCA is looking at both long-term and interim solutions to offer the valued deli and bakery services for the affected commissaries. An expedited contracting process will be used, and the agency expects to have a new contract in place and operations fully restored by early June.

As an interim solution, to avoid disruption of services, the agency is pursuing the hiring of the outgoing contractor’s eligible workforce on a temporary basis to deliver limited services until a new contractor is brought on board. If a break in deli/bakery services occurs, customers can purchase cold cuts, potato and macaroni salad, fruit and vegetable trays, and similar items in their commissary grocery and produce aisles. Store management has increased product quantities and will bring in new items to help fill in any short-term void.

The 22 commissaries impacted are:

About DeCA: The Defense Commissary Agency operates a worldwide chain of commissaries providing groceries to military personnel, retirees and their families in a safe and secure shopping environment. Authorized patrons purchase items at cost plus a 5-percent surcharge, which covers the costs of building new commissaries and modernizing existing ones. Shoppers save an average of more than 30 percent on their purchases compared to commercial prices – savings amounting to thousands of dollars annually. A core military family support element, and a valued part of military pay and benefits, commissaries contribute to family readiness, enhance the quality of life for America’s military and their families, and help recruit and retain the best and brightest men and women to serve their country. 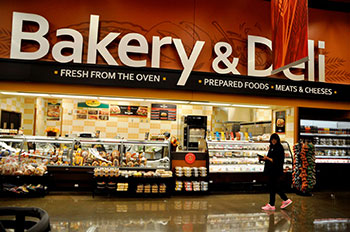