When Howard Schultz, Starbucks chairman and chief executive officer, traveled to the hills of northern Rwanda in 2009 to the Dukunde Kawa coffee cooperative, he asked a small group of farmers, “What is the one thing we can do to help you?”

One woman, named Immaculate Mukamwiza, raised her hand and said, “I need a cow. If I had a cow, I’d be able to give fresh milk to my family.”

Schultz was moved by her request, and when he came back to Starbucks headquarters in Seattle, he shared this story at company meeting for Starbucks partners (employees). A partner came to the microphone and said that she would like to pay it forward by buying Mukamwiza a cow.

One woman’s act of generosity and kindness sparked a wave of interest among the hundreds of partners gathered at the forum. Jackie Liao, a 16-year Starbucks partner on the Community Investments team, led the effort to make that offer a reality.

“We heard from partners throughout the building asking how they could contribute,” Liao said. “But it’s not just as simple as delivering a cow. You need to ensure the community has access to a water source, feed, medicine and training. We reached out to Heifer International to help make a systemic transformation.”

“I’m sitting in my office and I get this call,” New said. “We were thrilled. Starbucks is an amazing company and we had a lot of experience working with coffee cooperatives in Central and South America.”

Soon, Starbucks partners began to raise money to donate to Heifer International for the project. They put up posters, held bake sales, and even staged a rock concert – eventually contributing $55,000. Within five months, 30 dairy cows were delivered to Mukamwiza and other farmers in the cooperative.

At the time, Starbucks had just opened a Farmer Support Center in the capital city of Kigali, Rwanda and its agronomy team stayed in touch with the co-op to make sure their needs were being met.

“The offspring from the original gift of 30 cows now totals more than 100,” Liao said. “Something as simple as a cow has so much impact, and can transform a community.”

“Because of the impact we could see at Dukunde Kawa our first project – we returned to Heifer International to have that same impact in a community in Tanzania,” Liao said. “Our new project will take these learnings from Rwanda and apply them on an even bigger scale.”

From that first request , the Starbucks awarded $750,000 to Heifer International to work with 5,000 smallholder coffee farmers in the Mbozi district of Tanzania to introduce dairy cattle, and improve access to clean water, sanitation facilities and renewable energy.

The health and stability of coffee communities impacts farmers and their ability to be productive and raise sustainable crops. Starbucks work with Heifer International is part of an investment of more than $3.7 million in origin community grants in 2014 funded by proceeds from the Ethos Water brand to support infrastructure improvements and agricultural diversification projects. Other grantees include the National Cooperative Business Association, Lutheran World Relief,Mercy Corps, World Neighbors, Seeds for Progress and World Coffee Research.

“As we continue to grow as a company, we have a growing need to access quality coffee,” Liao said. “We want to continue to support farmers and their families to make sure there are incentives and safeguards to help keep them in the coffee business.”

About Starbucks Commitment to Ethical Sourcing
Starbucks is committed to creating a better future with farmers with integrated programs that help ensure a long-term supply of high-quality coffee, social investments that support coffee-growing communities, and investments in research and development. Find details in the newly-released 2014 Global Responsibility Report. 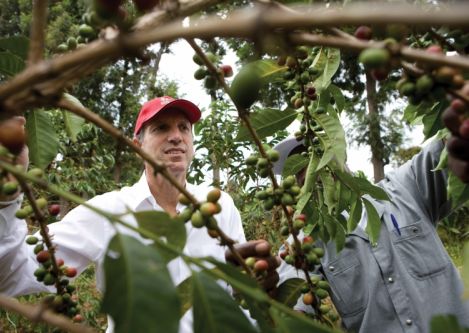