ALEXANDRIA, VA, 2015-4-15 — /EPR Retail News/ — A majority of Americans say they are optimistic about the economy and low gas prices are driving the optimism.

Overall, 52% of Americans are optimistic about the economy, an eight-point jump from March. Those most optimistic are younger consumers ages 18-34 (58%) and those in the West (58), according to survey results released by the National Association of Convenience Stores (NACS).

The surge in optimism continues on ongoing trend in 2015. A majority of Americans have said they are optimistic about the economy in three of the previous four months, when national gas prices averaged between $2.05 and $2.40 per gallon. These are the only months that a majority of Americans have expressed optimism about the economy since NACS initiated the survey in January 2013. Gas prices averaged $3.51 per gallon in 2013 and $3.36 per gallon in 2014.

Consumers also are optimistic about where gas prices may be heading. More than half (52%) of consumers feel that gas prices in 30 days will be about the same or lower than today, up from the one in four (26%) who predicted the same last month.

NACS, which represents the convenience store industry that sells 80% of the gas sold in the country, conducts the monthly consumer sentiment survey to gauge how gas prices affect broader economic trends. The NACS survey was conducted by Penn, Schoen and Berland Associates LLC; 1,103 gas consumers were surveyed April 7-9, 2015. Summary results are at www.nacsonline.com/gasprices; click on “Consumer Research.” 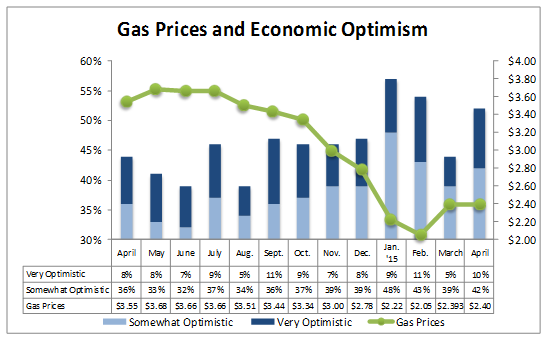