Emerging markets, particularly in Asia, have continued to dominate the shopping centre development pipeline with over 39 million sq m under construction at the end of last year. China accounted for over 60% of the pipeline, with Russia, Turkey and India also possessing significant space under construction, according to the latest research from global property advisor CBRE.

Shanghai tops the ranking for most new space under construction with 4.1 million sq m, followed by Shenzhen (3.4 million sq m) and Chengdu in third place with 3 million sq m, Chongqing and Guangzhou make up the top five most active markets with more than 20 projects in the pipeline. However, supply of new development in China and India is at risk of slowing down due to the economy and mounting financial pressures on landlords. Construction of some shopping malls is on hold due to lack of funding or in some cases landlords are considering changing the schemes to other uses.

Europe accounted for 20% of total completions in 2014 with Russia and Turkey continuing to dominate the new development pipeline.  Moscow was the most active European country in 2014 and the only city outside of China in the top five.  Notable schemes completed include the Avia Park which is currently Europe’s largest shopping mall totalling 231, 000 sq m of gross leasable area (GLA). Istanbul saw the addition of eight new shopping centres totalling 440, 253 sq m and also has one of the largest development pipelines in Europe.  This has been led by the easy availability of credit in the Turkish market which has fuelled consumer spending.

In the Middle East, Abu Dhabi continues to strengthen its position as a leading retail destination with the completion of four new centres including the Yas Mall located on Yas Island with space for 400 shops, a 20 screen cinema and 10,000 car parking spaces. Paris was once again the most active market in Western Europe, with only one centre opening in 2014.

“The factors driving the development pipeline of new space remains largely unchanged compared to last year in terms of location with new construction dominated by Asia and in particular China. Other influences include a growing middle class population in emerging markets, the urbanisation of large cities and a lack of high quality retail space required by cross border retailers.

Western Europe and the U.S. continue to suffer from a lack of new development and extensions and refurbishments of existing centres will be a key focus in a bid to continue to attract key retailers and consumers.” 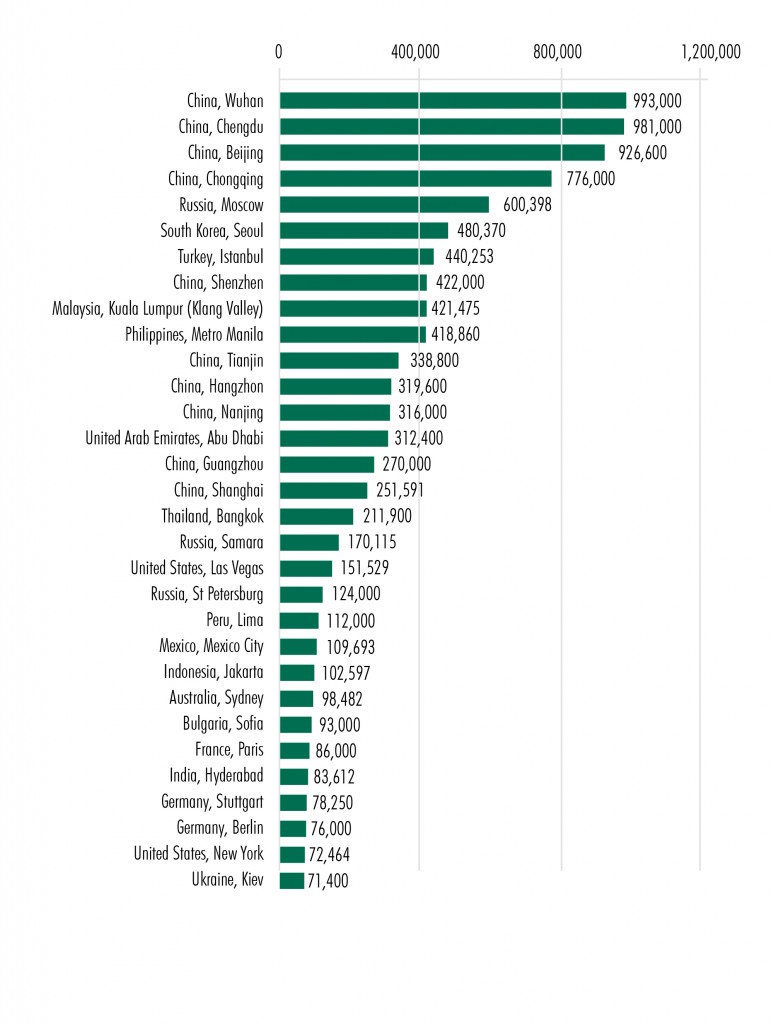 Source:  Centre for the Study of Commercial Activity (CSA), Costar and CBRE Research 2015

Notes to Editors:
This is the fourth year that CBRE has measured the level of shopping centre development in 171 of the world’s major cities. The survey was based on new centres of over 20,000 sq m and excluded retail warehousing and factory outlet centres.​