Hogan is a fifth generation Oregonian and recently returned to the Hillsboro area with his wife, Jaclyn, to open the franchise just three miles down the road from his childhood home on Hennig Street. He is a long-time Chick-fil-A team member, having started with the company at age 16 after moving to Charlotte, N.C. During his 10 years as a team member, Hogan worked in all areas of the restaurant, and even served as a trainer for new franchise owners and team members across the country. He pursued the path to becoming a Chick-fil-A franchisee soon after graduating from UNC Charlotte with a degree in Organizational Communication by entering Chick-fil-A’s Interim Manager program. In the program, Hogan spent 18 months managing Chick-fil-A restaurants in Louisiana, Illinois, Wyoming, North Carolina, South Carolina and Alabama. After building his career with Chick-fil-A, he is excited to return to his hometown to open Oregon’s first Chick-fil-A restaurant.

“I’m so glad to be back in my hometown with my family, and I can believe we’ll be opening the doors to our restaurant in one month,” Hogan says.  “Everyone has been so welcoming since I’ve moved back to Hillsboro, and I’m ready to repay that hospitality when we’re open for business. I hope community members will visit our restaurant to experience the great food and service that we’re known for, and to see what we’re all about.”

Chick-fil-A is known for its menu of fresh, hand-crafted food and offers a variety of options for guests. Signature items include a hand-breaded, boneless chicken breast sandwich, Waffle Potato Fries and hand-spun milkshakes. The Hillsboro restaurant will use only premium ingredients and make many of its menu items from scratch in the restaurant each day, including hand-chopped salads and fresh-squeezed lemonade.

Chick-fil-A at Tanasbourne will partner with regional farmers and suppliers to source as many locally- and regionally-grown ingredients as possible. In fact, the restaurant will source all of its bread from Portland-based Franz Bakery, which also supplies bread to Chick-fil-A restaurants in Washington. Chick-fil-A sources all potatoes used to make hash browns and Waffle Potato Fries from the Columbia River Basin – buying more than 438 million pounds of potatoes last year alone. Additionally, all of the apples used to supply Chick-fil-A’s West Region restaurants are grown in the Pacific Northwest, sourcing more than 2.25 million pounds of apples from the region each year. Chick-fil-A is also collaborating with national and regional poultry suppliers to ensure it serves chicken raised without antibiotics in all its restaurants nationwide by 2019.

Chick-fil-A’s sustainability efforts focus on serving better food in greener restaurants with reduced waste. Chick-fil-A at Tanasbourne will be built to LEED® specifications with water and energy efficiency features, air quality control and waste diversion efforts, among other initiatives. The restaurant will also recycle all cardboard and plastic used in back-of-house operations, and provide napkins, tray liners and Kid’s Meal bags made from 100 percent recycled materials. All beverages will be served in paper cups made from recycled materials.

Chick-fil-A at Tanasbourne will create approximately 80 new full-and part-time jobs, with team member hiring taking place now. Chick-fil-A is known for developing and retaining young talent, offering a supportive workplace with opportunities for leadership development, promotions that lead to management roles, the opportunity to earn college scholarships, respect for work-life balance (with Sundays off) and competitive wages. In fact, Chick-fil-A was ranked in Glassdoor’s Top 50 “Best Places to Work” in 2014, an achievement voted on by employees. Over the years, the restaurant company, which employs more than 80,000 individuals through both corporate positions and franchised locations, has provided more than $30 million to help its team members pay for college. Interested applicants can apply at jobs.portlandcfa.com.

Among other locally-based giving initiatives, Hogan will partner with a local food bank to donate surplus food to those in need multiple times a week.

With a longstanding tradition in the restaurant industry for setting the highest standards in customer service, Chick-fil-A recently ranked first for customer satisfaction in the Limited Service Restaurants Industry by the American Customer Satisfaction Index for 2015. The company has also earned recognition as one of America’s “Most Inspiring Companies” by Forbes Magazine, one of America’s “Top 20 Most Admired Brands” by The Harris Poll and “Top Fast Food Chicken Chain” by Consumer Reports, among other honors.

Chick-fil-A launched a new website, PortlandCFA.com, to serve as a hub for information about the Portland-area Chick-fil-A restaurants, as well stories about team members, the community and more. Guests are encouraged to visit PortlandCFA.com or the restaurant’s Facebook page – facebook.com/cfatanasbourne– for the latest information leading up to grand opening. The restaurant is scheduled to be open from 6:30 a.m. to 10 p.m. Monday through Saturday beginning Thursday, March 31.

About Chick-fil-A, Inc.
Atlanta-based Chick-fil-A, Inc. is a family owned and privately held restaurant company founded in 1946 by S. Truett Cathy. Devoted to serving the local communities in which its franchised restaurants operate, and known for its original chicken sandwich, Chick-fil-A serves freshly prepared food in more than 1,900 restaurants in 42 states and Washington, D.C. 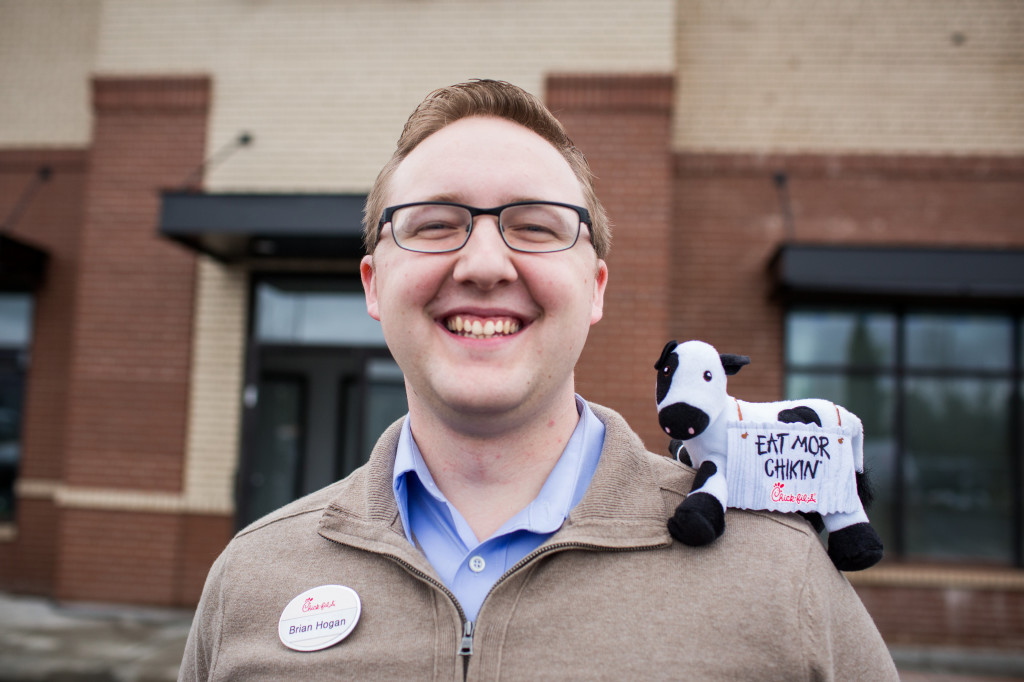