The study also found that the real estate recovery in Ireland continued to gain momentum, with Dublin, which experienced a 50 percent drop in rents during the downturn, showing the second-largest year-over-year prime occupancy cost increase among the 126 cities surveyed (up 16.6 percent year-over-year)—second only to Hong Kong West Kowloon (up 19.5 percent year-over-year). In North America, real estate fundamentals saw steady improvement with both Atlanta (Downtown) and Seattle (Downtown) among the 10 markets with the fastest growing prime occupancy costs.

“We expect the global economy to keep growing, and the global service sector, the primary occupier of prime office properties, will continue to expand through periods of volatility, “ said Richard Barkham, global chief economist, CBRE. “Since inflation is low, the growth in prime office occupancy costs is significant for both users and investors.”

CBRE tracks occupancy costs for prime office space in 126 markets around the globe. Of the top 50 “most expensive” markets, 20 were in Asia Pacific, 20 were in EMEA and 10 were in the Americas.

Europe Middle East & Africa (EMEA)
Europe is benefitting from a cyclical pick-up in consumer spending and business investment, as well as a very competitive currency and intense monetary stimulus, which helped to make Dublin, Stockholm and Barcelona the fastest-growing markets in the region. Most Central and Eastern European markets were down year-over-year, including Moscow, which is still in the midst of a recession. Costs accelerated quickly in South Africa, with Johannesburg, Cape Town and Durban all seeing increases of at least 6.9 percent from year-ago levels.

Only 11 out of 56 EMEA markets recorded a year-over-year decline in prime office occupancy costs.

In addition to London West End, the other market from the region in the global top 10 was London City (US$145 per sq. ft.).

The service sector will show particularly strong growth in Asia as pensions and insurance products gain market share. So occupancy cost growth will continue to trend upwards at a moderate pace.

Hong Kong (Central) is the only market in the world—other than London’s West End—with a prime occupancy cost exceeding US$200 per sq. ft. Hong Kong Central’s double-digit growth in occupancy costs was fuelled by two factors: an ultra-low vacancy rate due to lack of new development and continued demand for high-quality space in prime locations by mainland Chinese companies.

The most expensive market in the global ranking from the Pacific Region was Sydney (US$93 per sq. ft.), in 22nd place.

New York Midtown, number nine on the global list, remained the most expensive market in the Americas, with a prime office occupancy cost of US$137 per sq. ft.

In the U.S., economic growth is expected to pick up in the next several quarters following a turbulent opening quarter. Overall, occupier activity sustained last year’s momentum, leading to an increase in occupancy costs in 17 out of 22 U.S. markets covered in this survey. 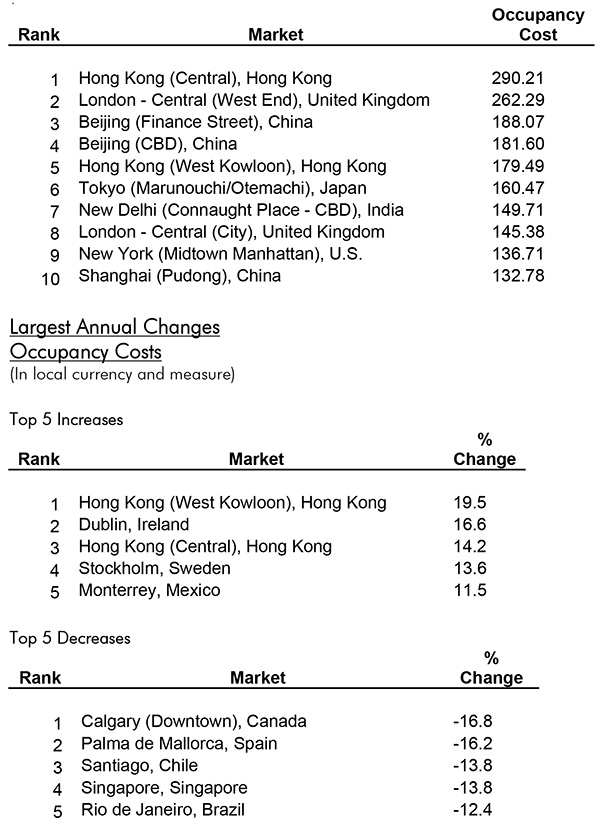 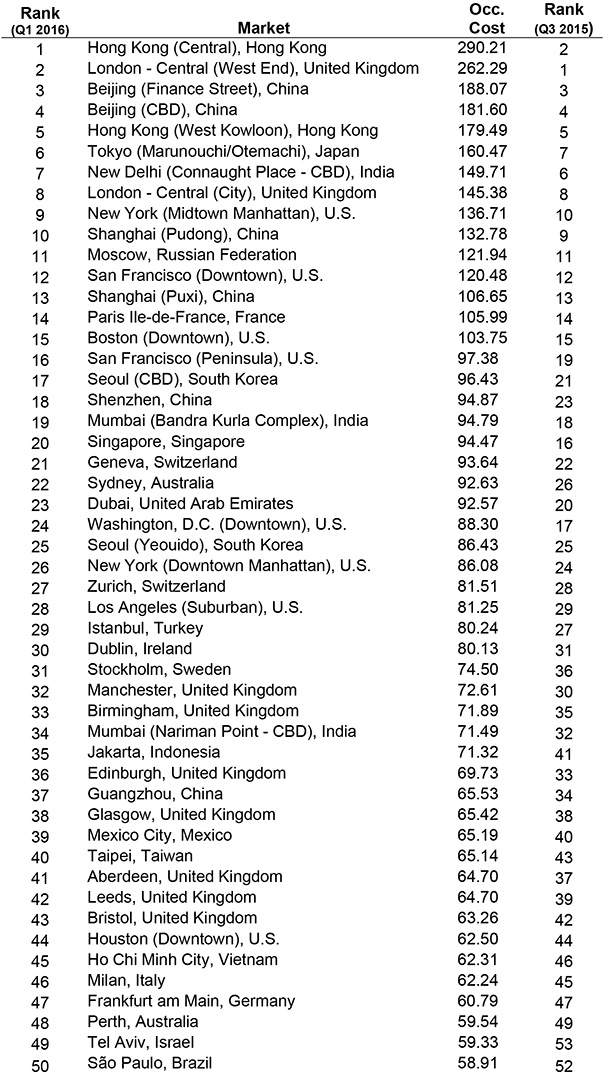