Created by CHI&Partners and directed by Henry Scholfield through Caviar, the ‘Christmas Yetis’ advert is a whirlwind of excitement, energy and colour, reflecting the market-leading speed of Argos’ same day Fast Track Delivery and Fast Track Collection services. Set against an exclusive adaptation by the Berlin Philharmonic Orchestra of “What’s This?”, the spot creates a palpable sense of festive excitement and anticipation.

Stephen Vowles, marketing director at Argos, said: “What we love about this fun, fast-paced campaign is that it beautifully captures the spirit of excitement and anticipation surrounding Christmas. Fun loving and friendly, these larger-than-life, speeding yetis colourfully bring to life the role that Argos hopes to play in the Christmases of families nationwide this Christmas – and the skill, speed and precision that make us market leaders, with our super-speedy, same day Fast Track Delivery and Fast Track Collection services.”

The advert was shot in camera on a purpose-built skating track in the picturesque centre of Warsaw, and stars five semi-professional ice skaters – with more than a century’s experience collectively – as the yetis. Based on the folklore that yetis move twice as fast as the average human, the Argos yetis leap and carve round corners like lightning on their skates – collecting, playing with and delivering Argos’ top products as they go, from Beats headphones, Virtual Reality headsets and Dyson vacuum cleaners to Fitbit, GoPro and Furby products.

A team of award-winning special effects experts from Animated Extras built the hyper-realistic yetis (each costing £30,000 to create) over a period of three months at the world-famous Shepperton Studios in Surrey, England. The team included experts who have previously worked to develop state-of-the-art costumes, props, animatronics and prosthetics for Hollywood movies and British TV shows, including James Bond, Avengers, Cinderella, Jupiter Ascending, Into the Woods and Cloud Atlas.

Inside the yetis are Peter Hallam (in orange), twice British Figure Skating Champion and holder of five international Gold medals as well as two silver medals at the Senior British Figure Skating Championships. The remaining blue, pink, green and purple yetis are played by George Southall (in blue), who is recognised as one of the best amateur freestyle skaters in the UK; professional Adrian Jack (in pink), a principal in Disney on Ice; and professional ice hockey players Brad Slade (in green) and Kevin McGlynn (in purple).

The campaign will break on TV today, and will be supported by print, video-on-demand, paid digital, social content and appearances of the Yetis in public in a bid to fast track the anticipation and excitement of Christmas for Britons with an in-store social competition.

Jim Bolton, deputy executive creative director at CHI&Partners, said: “This campaign brings out the excited Christmas-Eve kid in all of us who just can’t get to sleep, they’re so eager for the big day to arrive. We hope our loveable yetis bring excitement to thousands of British households this Christmas – reminding us of the joyous, fun-filled experience the festive season should be.”

The campaign follows Argos’ 2015 spot ‘Just Can’t Wait for Christmas’, in which skiing and snowboarding champions showcased their speed and skill on a mountainside in Chile’s Valle Nevado.

Sainsbury’s Argos is a leading UK digital retailer and sells more than 60,000 products under the Argos and Habitat brands. It sells through www.argos.co.uk, www.habitat.co.uk, its growing mobile channels, its 845 stores and over the telephone. Argos Digital Stores and Mini Habitats can also be found in Sainsbury’s supermarkets.

Argos is the UK’s largest high street retailer online and the second most visited website, with nearly a billion website visits a year. More than half of the company’s sales originate online and around 120 million customer transactions take place in its stores each year. Argos offers customers market leading delivery and collection services, including Check & Reserve, Fast Track Delivery and Fast Track Collection which make customers’ lives easier, every day.

Sainsbury’s Argos is part of J Sainsbury plc, a leading retailer of food, clothing and general merchandise and owner of Sainsbury’s Bank. Sainsbury’s commitment to helping customers live well for less has been at the heart of what the company does since 1869. J Sainsbury plc employs 195,000 colleagues across the UK and Ireland whose strong culture and values are integral to driving its success – now and in the future. Our vision is to be the most trusted retailer where people love to work and shop.

CHI&Partners is a UK-based advertising agency. Founded in 2001, the agency is listed in the Sunday Times’ Top Track 250 and International Track 200 as the UK’s fastest-growing privately-owned ad agency both within the UK and internationally, and was this year named the UK’s most awarded independent creative agency at Cannes Lions.

The&Partnership is an independent agency holding company where the majority owners are the founders and partners of the individual businesses, sharing one bottom line. A cross-discipline communications group built for today’s complex industry landscape, The&Partnership comprises ten businesses spanning four continents, with 1,500 staff. The group houses agencies specialising in advertising, design, CRM, media planning and buying, data analytics, PR, content and social – with digital at the core of all its businesses.

The&Partnership is backed by WPP, the world’s largest communications agency network, which is both a partner and a significant minority shareholder. 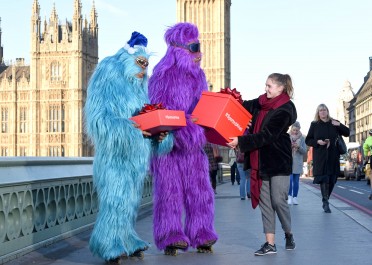