SEATTLE, 2015-3-30 — /EPR Retail News/ — Lillian Hochstein leaves the bustle of Seattle’s historic Park Place Market behind her and steps outside. She surveys Elliott Bay in the distance, raising her voice to be heard above traffic racing north and south on the double-deck Alaskan Way Viaduct that impedes the view of the waterfront.

The executive director of the Pike Place Market Foundation describes a strikingly different vista to come with a $73 million expansion that will add nearly 50 new stalls for farmers and artists, 12,000-square-feet of retail space, 40 new low-income senior housing units, 300 underground parking spaces and a 30,000-square-foot plaza with a viewing deck.  The new MarketFront is also the first step in the City’s vision to create a dynamic connection between downtown and the waterfront.

“Right now, we have visitors who want to get to the water and don’t go because it’s difficult to figure out how to get there,” Hochstein said. “So they don’t do it. We get 10 million visitors a year and we want more of them to visit the waterfront.”

On Monday, March 23, the Seattle City Council approved a $34 million investment toward expanding the Market. The State of Washington will contribute $6 million, and the rest will come from loans and private donations.

The Market Foundation’s $9 million capital campaign dubbed Pike Up! will provide vital funds for the Pike Place Market expansion with Starbucks becoming the first major company to announce its support, pledging $500,000 toward the effort.

“The Pike Place Market is where it all began for Starbucks, and our customers from around the world visit this iconic store because it is where our values, our spirit for community and connection come from,” said John Kelly, Starbucks senior vice president of Global Responsibility and Public Policy. “The MarketFront project will allow more people to come together in appreciation of everything that Seattle has to offer, and we are proud to be part of the Pike Place Market’s history and future.”

Over the years Starbucks partners (employees) have volunteered with the Foundation’s charitable causes, and they will lead community service projects during Starbucks Global Month of Service in April.

Hochstein, who joined the Market Foundation three years ago,  appreciates the strong link between Pike Place Market and Starbucks.

“We grew up together. Starbucks got a lot bigger than we did,” she said with a laugh. “We love the fact that Starbucks is so integrated into Pike Place Market history. When we go out to ask the public to participate, they always ask if Starbucks is involved. We’re inextricably linked in their minds.”

The roots of Pike Place Market reach back to the early 20th century when money from the Klondike gold rush helped pay construction costs. The market hit hard times in the 1960s and came close to being demolished. Voters came to the rescue and passed a “Save the Market” initiative in 1971, seven months after the first Starbucks became a neighborhood hub.

The City of Seattle created the Pike Place Market Preservation and Development Authority in 1973 with a wide-ranging charter encompassing preservation, supporting farmers, incubating small businesses and providing housing and services to low-income people.

Ben Franz-Knight is the executive director of the Pike Place Market Preservation and Development Authority. “With the MarketFront, we are reclaiming and completing the last piece of the historic district, and fulfilling a 40-year vision of those who fought to save the Market.  The removal of the Viaduct gives us the unique opportunity to complete an important chapter in the market’s past, and create a new one, with dynamic public space and a pedestrian connection to the waterfront.”

Franz-Knight said that attempts to get the current project off the ground date back to the ‘70s, but “because of the costs to build over the BNSF train tunnel below the site, it has never penciled out.”  The pending removal of the elevated Alaskan Way Viaduct, however, created an opening to finally make the expansion a reality.

The first phase of construction could begin as early as May and is expected to last about 18 months. The public is also invited to participate in this transformation and to be a part of Market history. Find out how by visiting  http://pikeup.org. 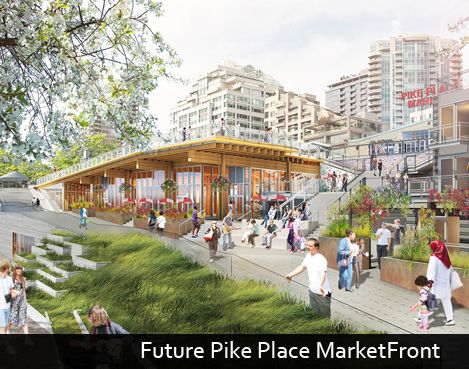