SEATTLE, 2015-12-9 — /EPR Retail News/ — From the Golden Gate to the Empire State, Starbucks is launching its first series of local designs featuring U.S. states and cities for this holiday’s Dot Collection.

Starting today (December 8) customers can pick up a local design in their hometown at participating Starbucks® stores. The full collection can be found online at store.starbucks.com, while supplies last.
Boston

Walk past the brownstones, and there is an undeniable fascination with college life that’s brimming throughout the city. As home to schools like Harvard and MIT, the design captures the city’s personality with diploma-like fonts layered over Boston’s historic homes.

At first glance, one may notice the bear inspired bv the California State flag. A closer look at the design reveals lines of varying angle and weight symbolizing the state’s unique terrain from the rolling hills to the sprawling deserts and winding coasts.

Set foot in downtown Chicago and feel the city buzzing with life. Look up and see skyscrapers that can’t be seen anywhere else. The design captures the spirit of the sprawling cityscape through a color scheme inspired by the Chicago’s flag.

Inspired by Florida’s tropical state of mind, pink flamingos that have graced lawns and imaginations, Starbucks created a design that draws from the quirkier, playful side of the Sunshine State.

No souvenir is as instantly recognizable as a Hawaiian shirt. The designer was intrigued by the vibrant colors of these quirky shirts and intricate patterns that feature flowers among other small emblems of coastal life.

A hike along LA’s Runyon Canyon at sunset features the sky transforms into various shades of pink. Enchanted by quiet moments like that in a city with so much noise, the designer wanted to capture something that will never grow old.

Astonished by the raw beauty of New York’s street art, the designer tagged all five boroughs in a design that celebrates the grit and elegance of the city.

Turn almost any corner of New Orleans and hear music calling out at any given moment of the day. The designer used a bold, illustrative style to revel in that rare kind of energy that can only be found in this vibrant musical city.

New faces from every corner of the globe come in and out of Starbucks first store at Seattle’s Pike Place Market every day. The designer decided to add a new glow to Starbucks very first siren logo using gold touches to toast to the company’s heritage in a new kind of light.

Climb the hills of San Francisco and it’s easy to spot new art or some off-the-wall sight. The designer showcased a city with quirky sensibilities while nodding to the classic landmarks that are quintessentially San Francisco.

Amazing views of Seattle’s Gasworks Park are the backdrop for the design that features the former Seattle Gas Light Company’s historic plant from the early 1900s that still stands today.

The larger than life flair of Texas takes center stage in this ode to the Lone Star State. The designer looked to the big and bold personality of the region to bring this rattlesnake skin-inspired motif to life.

Inspired by living and driving through bustling streets of Washington, D.C., the Starbucks designer layered the many winding traffic circles to represent the unique D.C. commute while nodding to the various neighborhoods that make up the city.

Building on the popularity of 2014’s inaugural collection, Starbucks in-house designers created a collection of artistic variations on the iconic Starbucks green “Dot” logo. The Starbucks® Dot Collection offers a variety of drinkware, including stainless steel and ceramic tumblers, cold cups, and mugs. Each piece in this collection of nearly 70 designs is packaged in a festive red box with most items priced under $25. 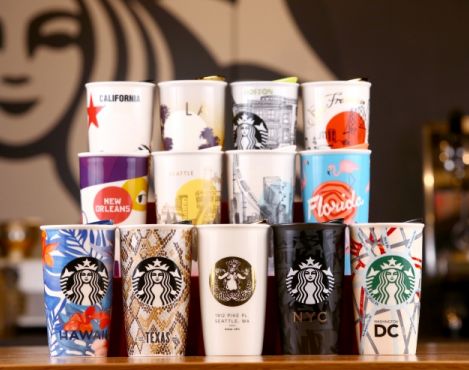