SEATTLE, 2015-12-14 — /EPR Retail News/ — The USO (United Service Organizations) has long been known as a home away from home for U.S. service personnel. The nonprofit’s services are complimented by providing a taste of home with Starbucks Coffee, and much more.

A recent effort by Starbucks and its customers raised approximately $455,000 for the USO and will provide thousands of VIA® to troops. Last month (November 1-11) Starbucks donated $5 from the online or in-store purchase of every Veterans Starbucks Card to the USO Transition 360 Alliance and made a matching donation of Starbucks VIA® Instant Coffee to the USO for delivery to active duty servicemen and women around the world.

The funds will support an initiative launched in May called the USO Transition 360 Alliance, which provides backing to military personnel and their families as they transition to civilian life, including career services and family support.

“At the USO, one of our core values is ‘do the right thing,’” said Lisa Anastasi, USO Senior Vice President of Development. “This is definitely a value we have in common with Starbucks. Whether we are helping deployed troops, military children or someone transitioning out of the military, we are dedicated to providing the right kind of support, even if it is harder to deliver. Through our partnership with Starbucks, the USO team has seen that they genuinely want to help us support our nation’s military.”

‘The End-to-End Solution for Military Members’

Matt Kress, manager of Starbucks Veterans and Military Affairs, said there’s a natural fit between the company and the USO, which was founded just prior to World War II to maintain morale in the armed forces at home and abroad. “When you think about troop welfare, USO is the first name that comes to mind,” he said. “They have an exceptional reputation with the U.S. military. They want to be the end-to-end solution for military members from the day they enter the service to a successful departure from the service and reintegration into civilian life. They look to Starbucks because we have an unparalleled social reach and cultural currency.”

Kress, a retired Marine who served in Iraq in the early 2000s, stressed that the USO’s traditional role is as appreciated now as it has been over the organization’s nearly 75-year history.

“You can count on the USO to be there to provide the small things that make your existence a lot better, ranging from using one of their call centers to get in touch with your family to providing a care package that gets you some of those things that you need, whether it’s shaving cream or a cup of Starbucks coffee,” said Kress.

Since 2009, Starbucks has donated over 400,000 packages of Starbucks VIA® to the USO, as well as thousands of pounds of coffee, K-Cup® Packs, pastries and coffee machines for use in USO centers around the world.

“Getting a cup of coffee is something your average American takes for granted,” Anastasi added. “When service members have had a stressful day, a cup of coffee gives them a taste of home and can help take their minds out of the war zone, even for a few minutes. It is hard to put a price on that. We receive great feedback from our service members when they receive these types of gifts that remind them of a taste of home.”

More than a Decade of Starbucks Support of Service Members, Veterans and Military Families

The VIA® coffee donation is one of the ways Starbucks, its partners (employees) and customers have actively supported military service members. Here are some other examples:

2002 – Starbucks worked with the Red Cross to send its first shipment of coffee overseas to troops. Members of the Starbucks Armed Forces Network (AFN) have since regularly organized care package shipments.

2003 – A Starbucks store in Fredericksburg, Virginia donated 93 pounds of coffee. It was delivered by then-Chairman of the Joints Chiefs of Staff Air Force Gen. Richard B. Myers during a holiday trip to the region.

November 2013 – Starbucks commits to creating career opportunities for 10,000 veterans and military spouses by the end of 2018. To date, Starbucks has hired more than 5,500.

November 2014 – Starbucks raised funds for organizations supporting veterans and active duty service members through The Concert for Valor and a book co-authored by Howard Schultz and Rajiv Chandrasekaran, “For Love of Country.”

December 2014 – Members of the Starbucks Armed Forces Network (AFN) have regularly organized care package shipments, including over 50 boxes shipped by the AFN for service members.

Throughout 2015 – Starbucks dedicated 16 Military Family Stores and plans to dedicate a total of 30 across the country by the end of 2016.

November 2015 – The company expanded the Starbucks College Achievement Plan to enable partners who are current or former members of the U.S. Armed Forces to extend their tuition-free education benefit to a spouse or child. (In January 2016, the Starbucks Newsroom will feature families who are embracing this new benefit)

November 2015 – Starbucks announced a new pay-for-service-benefit, which will cover up to 80 hours of pay each year for service obligations for active duty or reservists in the U.S. Armed Forces and National Guard. 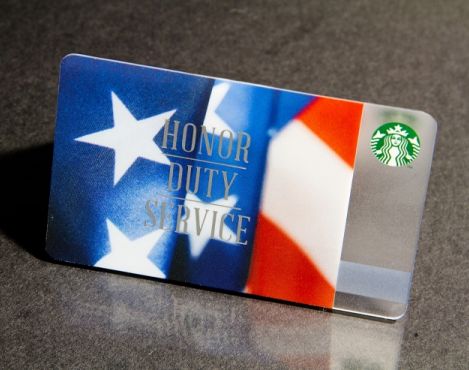 Starbucks and its customers raised $455,000 for USO (United Service Organizations)