Auckland, New Zealand, 2016-Aug-01 — /EPR Retail News/ — Last night, more than 50 checkout operators from Waikato New World and PAK’nSAVE stores tested their skills against each other onstage at the Clarence St Theatre with the hope of ultimately taking out the title of Foodstuffs North Island Checker of Year.

Event organiser Kristie McGregor said it is a fun night for checkers to demonstrate their fantastic customer service skills and engage in a bit of friendly competition with other stores.
“We have been running the Checker of the Year competition for over 40 years and it is a great opportunity to recognise our check out operators for the value they add to the customer experience,” said Kristie McGregor.

New World Onerahi checkout manager Tara Drake said that the Checker of the Year competition is a good way to showcase the checkers’ skills and something fun that we can do together as a team.

“The Checker of the Year competition is an incentive to make sure our skills are top notch. It also boosts our checkers’ confidence in their customer service skills,” said Tara Drake.
The competitors’ colleagues wore costumes in the super hero theme of the night and cheered them on with banners, chants and store mascots. 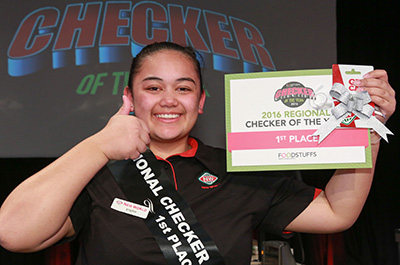 New Zealand: Checkout operators from Waikato New World and PAK’nSAVE stores competed against each other for Foodstuffs North Island Checker of Year title