LONDON, 2015-2-3 — /EPR Retail News/ — A hilarious moment erupted at a Sainsbury’s store when Spencer Matthews surprised the team, having cleverly disguised himself amongst the tomatoes – wearing the new Comic Relief red nose!

The Made In Chelsea star was launching the nine new character-themed red noses, which are available at Sainsbury’s stores and online nationwide now for £1, at least 60p of which goes to Comic Relief.

Colleagues at the Wandsworth store in London were advised they were being filmed for an internal training video but got more than they bargained for when Spencer surprised them by bursting out of the fresh tomato crate.

Spencer took part to encourage the British public to pick up a red nose and show their support for Comic Relief. The nine new red nose characters are now available for shoppers to collect in the run up to Red Nose Day on Friday 13th March.

Spencer commented: “It was a no-brainer taking up the challenge of hiding amongst the tomatoes and surprising the team. There were some really entertaining reactions, lots of surprises and a few colleagues who almost jumped out of their skin – it’s not something you expect to encounter in the fresh produce aisle! I’m a big fan of Comic Relief, so leapt at the chance to raise awareness for the charity. You can now do your bit and pick up your own red nose in Sainsbury’s and online to help raise money.”

With a donation from each sale going to help transform the lives of some of the poorest and most disadvantaged people here in the UK and across Africa, Sainsbury’s is encouraging everyone to show their support for Comic Relief by picking up one of the official red noses or Red Nose Day merchandise at their nearest store or online.

Jaz Bhogal, colleague at Sainsbury’s Wandsworth commented: “It’s not everyday we discover a TV personality disguised in our store – and it’s even more unusual to see them hidden amongst the tomatoes! I got the surprise of my life but it was fantastic to see Spencer donning one of the new red noses to launch this year’s Sainsbury’s Red Nose Day campaign.”

“We’ve been a supporter of Comic Relief since 1999 and last time, we raised a huge £11.5m; but we’re hoping that our fundraising efforts this year will help make an even bigger difference to those in need, both here in the UK and across Africa.”

About the Red Nose Day campaign in Sainsbury’s
Sainsbury’s is the official retailer of Red Noses and Red Nose Day merchandise – bag your £1 Nose with at least 60p going to Comic Relief to help people living really tough lives in the UK and across Africa. 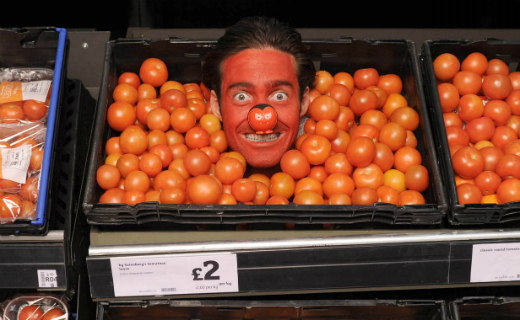